The nuclear overhauser effect is defined as a change in the integrated intensity of one spin when the equilibrium population of another spin is perturbed by saturation or inversion. So, it is the transfer of nuclear spin polarization from one spin-active nucleus to another. However, the nuclei being irradiated should be closer to the other nuclei, in space, to transfer the effect.

The nuclear overhauser effect was first theoretically proposed by Albert W. Overhauser in 1953[4]. He stated that if the gyromagnetic ratio of nuclei will be the same as that of electron spin, then, when the electron spin resonance is saturated in the metals, it will affect the polarization of nuclei to the same degrees as of electrons.

The effect was however experimentally observed by I. Solomon. He experimented on an anhydrous sample of hydrofluoric acid[4]. He observed that the longitudinal magnetization of dipolar-coupled pairs of spins, of different frequencies, when saturated or undergone inversion of the 1H resonance, approx 30% increase in the 19F signal was observed. The same was observed in the proton signal when 19F was excited[4].

The quantitative definition[5] of nOe is explained by the following equation, considering the effect between nuclei S and I. Where, S is irradiated and I is observed.

If the intensity of the I nucleus is I0 before irradiation of nucleus S, and I1 after the irradiation. Then, the fractional increase in intensity ηI(S) will be (I0 − I1)/I0[1].

The equation can be represented as:

Where 𝜸s and 𝜸I are the magnetogyric ratios of the two nuclei, S and I.

The nuclear Overhauser effect is an effective technique to determine the molecular structure of the chemical components. Further, configurational and conformational analysis of small organic molecules can also be studied by applying the nOe effect.

To have a clear understanding of the nuclear overhauser effect, a good grasp of the principle and mechanism of “Nuclear magnetic resonance” is required.

Let’s look into the principle, mechanism, and the factors affecting the nuclear overhauser effect.

A charged nuclei precess at the magnetic field, and the precessional motion occurs at a certain frequency, called Larmour frequency. It is specific to each nucleus and relates to the strength of the applied magnetic field[2].

Boltzmann distribution is used to determine the population of the spins at two levels at thermal equilibrium. Pɑ and P𝛃 represent the spin population at two-level.

So, when the equilibrium is disturbed and a nucleus is perturbed by irradiation using an Rf oscillator, the nuclei can undergo excitation when the oscillator frequency matches with the Larmor frequency of the nuclei.

When this occurs, the excess spin population transitions to a higher energy state from a lower energy state. Then, the system tries to bring the thermal equilibrium to its original state and certain processes come into play. One of these processes is spin-lattice relaxation which is the transfer of energy from spin to the surrounding lattice[1].

The molecule undergoes rotational and internal motions and the applied magnetic field can be disturbed by some other protons inside the molecule present at different energy continuum. So, the relaxation and energy exchange between two nuclei occurs through dipole-dipole interaction[1].

Apart from the populations of the two states (Pɑ and P𝛃), the transition of spins in two states (upper and lower) also depends on the efficiency of relaxation (transition probability, denoted by W) and temperature around the surrounding lattice.

The factors which affect the dipole-dipole relaxation include [1]:

To understand the mechanism of nOe, a hypothetical situation is created. So, assume that two nuclei termed I and S are in close space to each other and there is no scalar coupling between them. Here, S is irradiated and I being observed.

The two-levels of the transition of nuclei S and I are represented as S1 and S2; and I1 and I2. Further, you know that the nuclei have two energy levels that include alpha (low-energy) and beta (high-energy).

At the thermal equilibrium, the 𝛂𝜶 state contains the highest population, 𝜶𝞫, and 𝜷𝜶 states have an intermediate population, and the 𝞫𝜷 state has the lowest population[1]. And as both the nuclei I and S are not J-coupled, the quantum transitions of both nuclei have the same energy.

Now to understand the nOe, consider the following situations[1]:

Then the system tries to restore the equilibrium by using a predominant relaxation pathway[1]. It can be double-quantum process W2 (in fast-tumbling, smaller molecules, and lead to positive nOe), or the zero-quantum process W0 (in slower-tumbling macromolecules and lead to negative nOe)[1].

The relaxation occurs by transferring some population x. This whole phenomenon is explained by using the following equation:

When W0 is a predominant relaxation pathway, the x is transferred from 𝜶𝞫 to 𝜷𝜶 state and signal intensity will be reduced. The equation of population difference is represented[5] as: 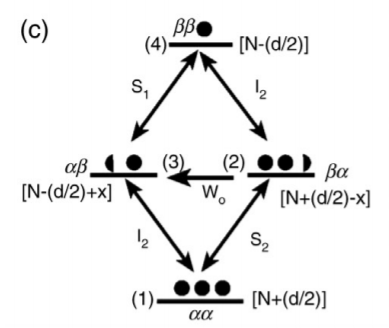 Figure: an illustration of population and energy level at different states of nuclei I and S when the system W0 is a predominant relaxation pathway.[1]

When W2 is a predominant relaxation pathway, the x is transferred to the ground state and signal intensity will be enhanced. So, the equation is represented as[5]: 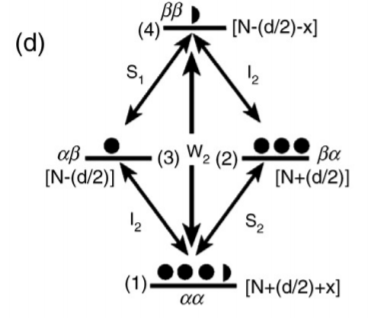 Figure: an illustration of population and energy level at different states of nuclei I and S when the system W0 is a predominant relaxation pathway[1].

The nOe depends on some key factors which can alter its response. Further, the effect can also be changed depending on the situation and system of the experiment (like if it’s a three-spin system, three-pin effect, nOe difference spectra.

Factors that affect nOe are[1]:

The nOe strongly depends on the internuclear distance “r” which can be understood by the following equation.[1]

Where 𝜸s and 𝜸I are the magnetogyric ratios of the two nuclei, S and I.

The case discussed before was of a pair of nuclei. Now, consider another case in which more than a pair of nuclei are arranged linearly at equidistant and exerting relaxation effects on one another.

In this case, the nucleus B will experience more relaxation effects being equidistant from both the nuclei A and C. However, nuclei A and C will only relax by the effect of B[1].

nOe occurs in two ways: direct and indirect. This effect can be distinguished from their kinetic behavior. Now, consider the same situation as in the above-given case. The nucleus A has a direct effect on the nucleus B and the nOe grows immediately after the irradiation of the neighboring nucleus with a first-order rate constant[1]. Further, the direct nOe also depends on the internuclear distance (r)-6.

However, the indirect nOe is observed after a lag time and the effect can increase or decrease depending on the irradiation time[1]. For example, prolonged irradiation of the A nucleus will build a negative nOe, whereas short irradiation will create a positive nOe at nucleus C.

The one or two dimensional NMR techniques that exploit the nuclear overhauser effect include[6]:

The solvent is an essential factor to record the nuclear over Hauser effect. Studies show solvents with sharp intense lock signals (such as d6-DMSO or d6-acetone) are more effective than the weaker lock signal (CDCl3-deuterated chloroform) or broad lock signal (D2O-heavy water)[1]. Heavy water is not a suitable solvent because its chemical shift largely depends on the temperature.

The d6-acetone is preferred in the concentration of 2-3%. Further, the use of protonation of solvents is avoided because they reduce the quality of the spectrum[1]. Also, the presence of exchangeable protons in the solvent can complicate the spectra.

The temperature gradient affects the quality of the spectrum by disturbing various physiological parameters.[1] For example, different temperatures across a sample can lead to different chemical shifts which further leads to the broadening of the spectral lines.

What are the factors that affect the size of the temperature gradient?

It can be room temperature, heating due to radiofrequency pulses, and due to the flow rate of cooling and heating gases[1].

How can you achieve the required temperature?

The impurities like paramagnetic metal ions can interfere with the nuclear overhauser effect records during experiments. So, it’s necessary to remove these impurities before experimenting[1].

The paramagnetic metal ions can be removed by complexation with ethylenediaminetetraacetate (EDTA) and filtering the solutions through chelating resins. Similarly, oxygen can be removed by repeatedly freezing the content in the NMR tube by dipping it in liquid nitrogen[1].

Also, it’s necessary to remove any moving metal objects near the magnet while performing the nOe experiment.

The quality of the NMR tube is also a major effect on nOe records. A low-quality NMR tube, instead of high quality, can generate large spinning sidebands, bad line shapes, and also affect the resolution[1]. These problems are difficult to fix.

What comes under the category of good quality NMR tubes?

5. Interference of the chemical exchange process

If a nucleus is involved in both the nuclear overhauser effect and the chemical exchange process, then, the intensity of the signal is disturbed.

The nuclear Overhauser effect is an efficient technique used to determine the 3-D structure of small organic molecules and large biomolecules (such as protein) in solution. The structure is determined by identifying nuclei in close space, where the nOe arises due to dipolar relaxation between nuclei. It is an excellent alternative methodology compared to X-ray crystallography.

The nOe gives detailed information on the internal structure, conformational flexibility, reorientation of molecules, and features that correlate with biological function[3]. It’s a growing area where improvements are being made using modeling software, developing newer experimental protocols, and working on molecular mechanics calculations[3] to get more and clear information on the confirmation of the molecule.