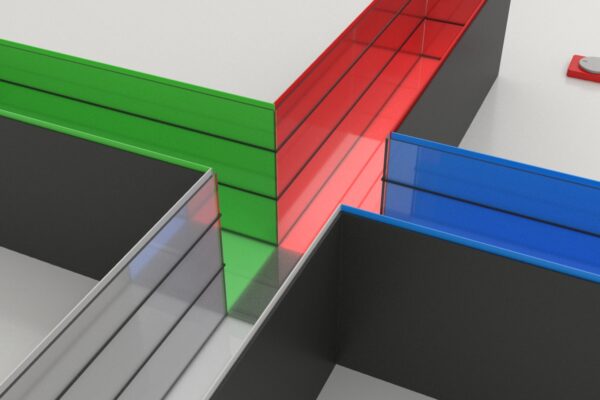 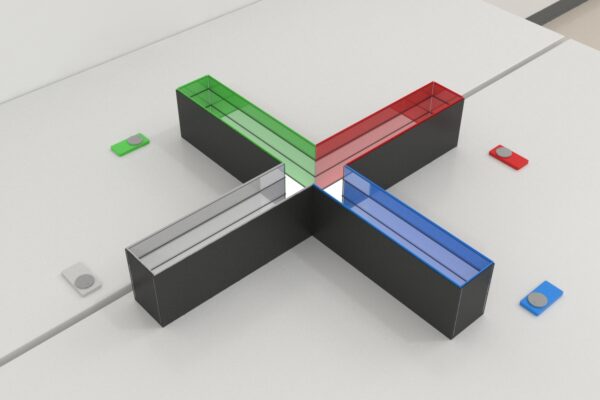 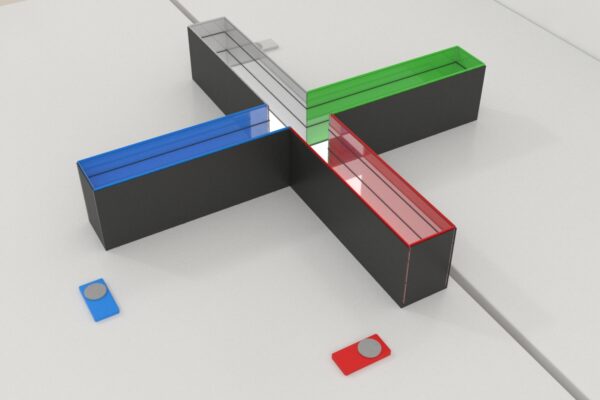 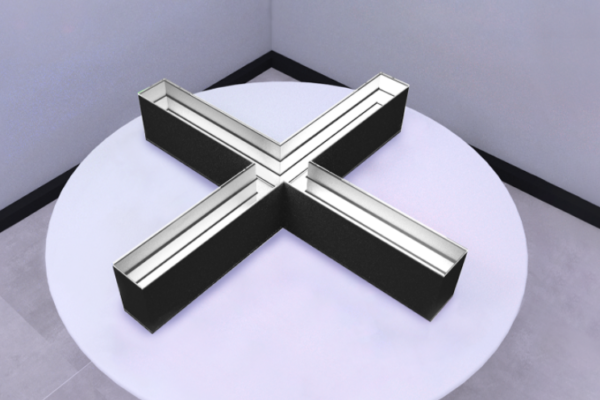 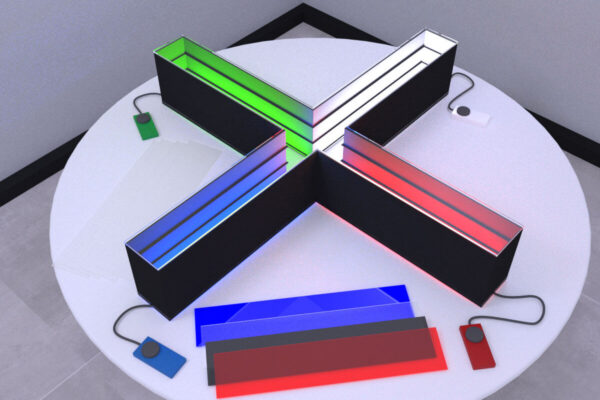 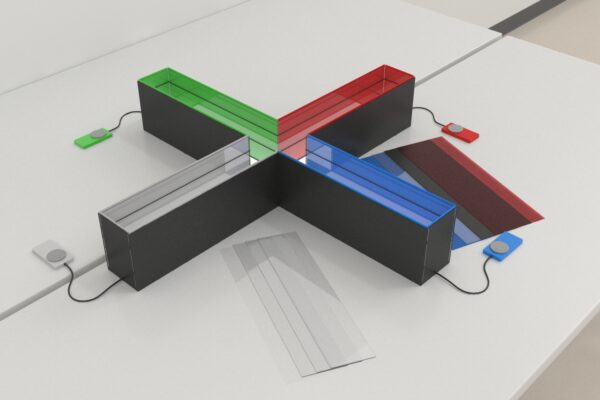 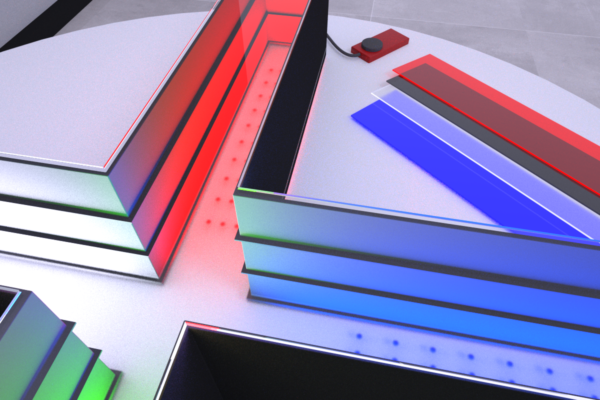 The Visual X maze or Visual-Stimuli 4-arm Maze (ViS4M), is used to quantitatively study visual and cognitive abilities in rodents. This apparatus can be used to assess disorders such as early functional decline associated with aging and Alzheimer’s disease progression (Vit et al., 2021, Vit et al., 2020). It is an X-shaped apparatus that can be equipped with either light-emitting diodes (LEDs) to study color vision or different colored objects to study contrast vision in rodents.

The Visual X Maze (ViS4M) apparatus is composed of black acrylic walls attached to a glass or acrylic base. Each arm of the maze measures 45 cm in length, 10 cm in width, and 15 cm in height. Transparent and semi-transparent white floor plates are placed on the bottom level of each arm of the maze using small acrylic track brackets.

The Visual X Maze (ViS4M) is used to study visual sensitivity in rodents. It is an X-shaped apparatus that can be equipped with either light-emitting diodes (LEDs) to study color vision or different colored objects to study contrast vision in rodents  (Vit et al., 2021, Vit et al., 2020).

The assessment of visual abilities is an important factor in the evaluation of visual impairments. Visual impairments, particularly those associated with amyloid plaque deposits can also indicate the development of disorders such as Alzheimer’s disease (Koronyo-Hamaoui, M., et al., 2011; Koronyo, Y. et al. 2017; Dumitrascu O., et al., 2020; Hart, N., et al., 2016; La Morgia, C., et al., 2015; Shi, H., Koronyo, Y., et al., 2020; Shi H, Koronyo Y, et al 2020a; Doustar J, et al., 2020). Deficits in vision, especially impairments in color and contrast sensitivity are common symptoms  (Risacher et al., 2013; Kirby, Bandelow, & Hogervorst, 2010). The Visual X Maze allows the assessment of color vision and contrast vision in rodents, which can be used as a translational tool to study visual impairments associated with Alzheimer’s disease. During color vision tests, the maze is equipped with LEDs that emit either red, green, blue, or white light in each arm of the maze. The subject’s innate exploratory behavior is tested, and spontaneous alternations and transitions between each arm of the maze can be observed, which help indicate color preferences and color discrimination. Moreover, different light intensities can also be used to observe how they affect exploratory behaviors in the subjects.

In contrast vision testing, identical objects of different colors are utilized instead of the LEDs. The objects are placed halfway through each arm of the maze and create a contrast with the black walls and white floors of the apparatus. Apart from evaluating rodents’ visual abilities, the Visual X Maze also allows the evaluation of cognitive functions in rodents by observing revisits between the maze’s arms to assess learning and memory behaviors.

The Visual X Maze (ViS4M) is an “X” shaped apparatus that is composed of black acrylic walls attached to a glass or acrylic base. Each arm of the maze measures 45 cm in length, 10 cm in width, and 15 cm in height and is equipped with transparent ceiling covers with perforations. In each arm of the maze, removable transparent and semi-transparent white floor plates can be inserted using track brackets.

Below each floor plate, small acrylic track brackets are attached to the apparatus walls that allow floor plates to be inserted. Floor plates that come with the apparatus include four transparent floor plates and four semi-transparent white floor plates. In each arm of the maze, a light-emitting diode (LED) source can be directly inserted into the base. Each LED source consists of a strip of 40 small LEDs arranged in four lines and connected to a dimmer low-voltage transformer. The LED sources provide chromatic light at a single wavelength λ (one red source λ ~628; one green source λ ~517; one blue source λ ~452nm) or a mix of λ (~441 and 553 one white source) and can be controlled by individual remote devices.

Clean the maze thoroughly before starting a trial and in between trials to avoid odor cues from previous trails. Conduct testing in a dark room with the sole light source being the maze’s illuminated arms for color mode trials. For contrast mode testing, an external dim red light illuminates the maze. A tracking and recording system such as the Noldus Ethovision XT can be used to assist with observations.

Place the subjects in a dark testing room and allow them to habituate with the dark for 30 minutes.

Place transparent and semi-transparent white floor-plates into the arm of each maze via the plate insertion gaps. Put the light intensity on low for the four arms of the maze. Place the subject in the center of the maze and allow it to explore the maze for 5 minutes. Return the subject to its home cage after the 5 minutes are over. Conduct trials over five days with the light intensity on the four following days being medium, high, red-high, and finally equal. Additionally, the subjects can be tested using a no color light condition in which the LED sources are not lit, and the assessment room dimly lit. The no color light condition can be carried out before the other light intensity conditions based on experimental needs.

Place the transparent floor plates at the bottom level with an additional semi-white transparent plate below this. Place identical objects of different shades (black, grey, clear, and white) in the middle of each arm of the apparatus. Provide the maze with red light illumination. Place the subject in the center of the maze and allow it to explore the maze for 5 minutes. Return the subject to its home cage after the 5 minutes are over. Conduct one trial before and one trial after color mode testing.

Vit et al investigated color and contrast visual sensitivity in aging mice and mice with Alzheimer’s disease (AD) using the Visual X Maze (ViS4M) (Vit et al., 2021, Vit et al., 2020). Cohorts of male and female wild-type (WT) mice and double-transgenic APPSWE/PS1ΔE9 mouse models of AD (AD+ mice) of 8.5, 13, and 18-months old were used in the study. The subjects were first tested for color vision changes or impairments using color mode. LEDs placed in the base of the maze provided light at the following wavelengths (λ): red (λ ~628nm), green (λ ~517nm), blue (λ ~452nm), or mixed λ for white light. The 8.5-month old mice were also tested in a no color condition in which the LED sources were not lit. Various combinations of mesopic and photopic illuminations were also tested that included low, medium, high, red-high, and equal conditions. Spontaneous alternations between the arms of the maze were observed, and results indicated that the WT mice tended to consecutively enter each arm of the maze before revisiting any arm. In no color condition, it was observed that alternations were substantially higher than chance probability. However, alterations were lower in the no color condition as compared to red-high and equal conditions. In the AD+ mice, it was observed that alternations were around the chance level in all ages and all light intensity conditions. The percentage of alternations  (% alterations) was substantially reduced in AD+ mice that progressed with aging, compared to the WT mice that had a constant % alternation with aging. Further results indicated that the subjects from both experimental groups spent more time in the red arm of the maze and the least amount of time in the blue arm. At 13-months of age, the AD+ mice spent significantly less time in the white arm as compared to the WT mice. A percentage of unidirectional and bidirectional directions between the arms of the maze were also analyzed. An increase in percentage transitions was observed from the green to red arms and green to blue arms, specifically in the 8.5-month old AD+ mice.  Moreover, there was a substantial decrease from white to black and black to white transitions under the red-high and equal conditions as compared to the no-color condition. The AD+ mice also had higher blue to green and green to blue transitions under red-high and equal conditions as compared to the WT mice.

The subjects were then tested for contrast sensitivity by placing identical objects of different colors (white, black, grey, and clear) in the maze’s four arms. No colored lights were used. Alike to color mode tests, the WT mice spontaneously alternated between the four arms of the maze compared to the AD+ mice. The WT mice did not exhibit a preference for any arm; however, the AD+ mice had a higher preference in the arm with a clear object and a lower preference for the black arm. Observations of arm transitions revealed impaired contrast sensitivity in the AD+ mice.

The subjects were also tested using the Barnes Maze to assess their long-term memory. The results indicated that the 13-month old AD+ mice exhibited long-term memory impairment as compared to the WT mice.

The following parameters can be observed using the Visual X Maze (ViS4M):

The Visual X Maze (ViS4M) is used to study color sensitivity and contrast sensitivity in rodents. It can be equipped with different colored LEDs to study color preferences and color discrimination. Different light intensities can also be used to observe how they affect exploratory behaviors. Identical objects of different colors can also be utilized to examine contrast vision since the objects contrast with the black walls and white floors of the apparatus. Pre-training is not required using the Visual X Maze (ViS4M), so experimentation takes a short amount of time. Similar to other apparatuses such as the Y-Maze and T-maze, spontaneous alteration between the four arms of the maze can be observed. Moreover, the Visual X Maze (ViS4M), also allows the assessment of cognitive abilities in rodents by analyzing working memory through observing the number of revisits to each arm of the maze. The Visual X Maze (ViS4M) can be used as a reliable tool in exploring visual impairments in rodents, which can be used to study disorders such as Alzheimer’s disease, where visual defects are a common symptom.

All product(s) is defined on a PO or List Price for nonregistered users. Please inquire about bulk order discounts. To view our SAM, or FBO credentials please contact us for our CAGE code and DUNS number. MazeEngineers products are NOT designed for human consumption, testing, or clinical utilization. They are designed for pre-clinical utilization only. Customers purchasing apparatus for the purposes of scientific research or veterinary care affirm to adherence to applicable regulatory bodies for their country in which their research or care is conducted.
Close Menu
<script type='text/javascript' src='https://conductscience.com/maze/wp-content/themes/salient5.5/salient/js/build/priority.js?ver=15.0.2' id=