Need NMR Instruments for your lab?

The location of the peaks is important in discovering how many protons there are in a molecule, as well as other information about the surrounding electronic environment.

In addition to knowing where the peaks are, on the chemical shift scale, and what influences the delta value, one must also consider the fact that the peaks in an NMR spectrum are not always a singlet. [1][2]

In fact, the interactions between different types of protons present in the molecule cause a single peak on an NMR spectrum to split into doublet, triplet, or multiplet, a phenomenon known as the spin-spin coupling.

There could also be other complex peak splitting patterns. The spin-spin coupling phenomenon, at its core, involves spinning nuclei.

A nucleus that has an odd number of protons spins along its axis. A proton has two possible spin states +1/2 or -1/2. In the absence of a magnetic field, these spins are quite random. In the presence of an external magnetic field, there is a tendency of the nuclei to align either with or against the magnetic field. [3][4]

The spins which are aligned with the external magnetic field have a lower energy state than the ones aligned against the magnetic field. The spin states and the energy levels are shown in the diagram below: 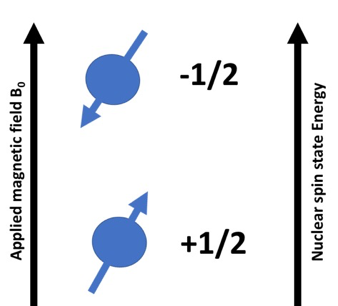 Depending on the orientation of the spins, the effective magnetic field on the proton would either increase or decrease by a small factor.

The applied magnetic field is denoted by B0

The induced magnetic field is denoted by Bi

The effective magnetic field experienced by the proton

At the core of the molecule, these spinning nuclei ultimately give rise to the phenomenon of coupling in NMR spectrum.

The interaction between the spin magnetic moments of the different sets of H atoms in the molecule under study, is known as spin-spin coupling. It is imperative that a minimum of 2 sets of protons are present in adjacent positions.

The magnetic spins of these resonating nuclei interact with each other and affect each other’s precession frequencies.

The effective magnetic field (Beff) experienced by neighboring protons as a result of magnetic spins thereby affect the chemical shift values. [5] In addition to the chemical shifts, the nature of the peaks in the NMR spectrum is also affected.

A closer analysis of an NMR spectrum reveals that each signal on the graph represents one kind of proton present in the molecule. It is commonly observed that this signal is not always a single peak but has multiple peaks.

This multiplicity of the signal is a very important determinant for the structure of the molecule. This phenomenon by which the spins of resonating protons cause the peaks on the NMR spectrum to multiply is known as peak splitting. [6]

The splitting of the NMR signal gives precise information about the number of neighboring protons in a molecule. There is a formula to calculate the multiplicity of the peaks in the NMR spectrum.

I= spin number of protons

Since I is always ½, we can rewrite the formula as n+1.

The other relevant information which comes along with knowing the number of peaks is the intensity of the peaks (which is seen as the height of the peaks).

As a general rule, the height of the peaks or in other words, the relative intensities of the peaks can be determined by using Pascal’s triangle. [7]

This is a number pattern invented by a famous French mathematician, Blaise Pascal. We can use the n+1 rule to determine the number of peaks.

The height of the peaks, caused due to spin-spin coupling is in proportion to the values in the row (corresponding to the value n) in Pascal’s triangle.

If we look at the figure below and consider a quartet, we would observe that the peak of the extreme signals is 1/3rd of the first and the last peak. 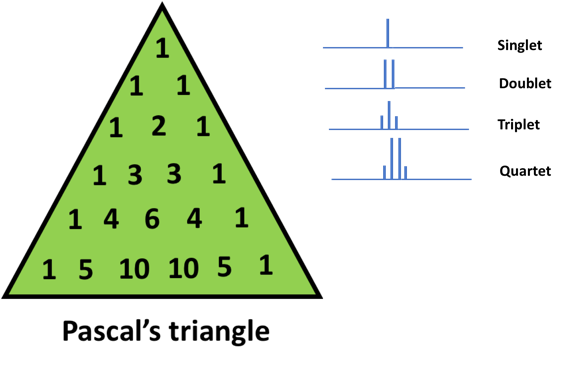 With n=0 (or 0 neighboring protons), we get a single peak. This is depicted as 1 at the apex of Pascal’s triangle

Similarly, for n=1 (or 1 neighboring proton), we get a doublet (using the n+1 rule). This is written as 1 on either side of the second row in Pascal’s triangle

Moving on, for n=2 (or 2 neighboring protons), we get a triplet. In this case, the number 1 is written at the left and right of the triangle and the sum (1+1) is shown in the middle.

For n=3, we get a quartet. In this case, again 1 is written at the ends and the neighboring numbers are added. Therefore, we end up with the sequence 1 3 3 1

We can explain the rest of Pascal’s triangle in a similar way. This method of generating numbers is known as binomial expansion.

Let us try to understand peak splitting using the following molecule as an example;

Let us calculate the multiplicity for the hydrogen atoms.

There are 2 sets of hydrogen atoms in Ethyl Chloride and we should expect to get 2 peaks in the NMR spectrum. This, however, is not true when it comes to visualizing the actual spectrum.

Each of the hydrogen atoms will influence the neighbors in an applied magnetic field and would lead to multiple peaks. To determine how many peaks we can get for hydrogen atoms in CH2 or CH3, we need to apply the above rule of multiplicity determination.

After applying the formula,

Therefore, there will be 4 peaks for hydrogen atoms in CH2

Similarly, there would be 3 peaks for hydrogen atoms in CH3

We have seen earlier that the nuclei have a property known as spin. The spinning hydrogen nuclei in a molecule will interact with each other and cause the signal in the NMR peak to split.

The separation distance between two adjacent peaks, as a result of the spin-spin interaction in a multiplet, is constant and is known as coupling constant (denoted by the letter J).

The value of the coupling constant depends on the following factors:

A curious case of singlets and doublets

Let us look at the interesting case of determining if the two adjacent peaks are doublets or actually made up of 2 singlets.

If we, for example, observe peaks in the molecule which are exactly 10 Hz apart and look indistinguishable from each other, it is very hard to decide if they are singlets or doublet. 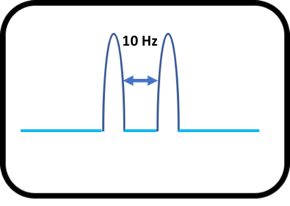 In order to know whether the peaks are a doublet, we would increase the applied magnetic field. Now, because the coupling constant (J) is constant between the adjacent peaks, the doublet peaks would be unaffected by the change of magnetic field. On the other hand, if the peaks were made of two singlets, then, the individual peaks would shift further apart on the chemical shift scale as shown below: 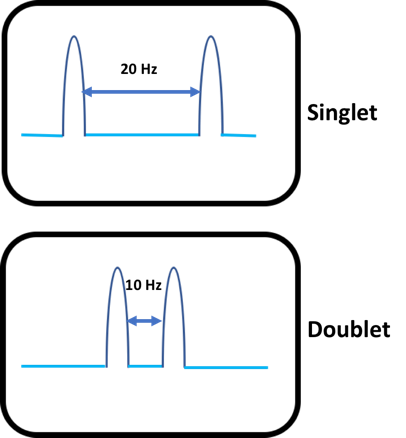 In the above example, if the peaks are doublets then the value of the coupling constant remains 10 Hz.

The spacing between the split lines or the J constant between coupling protons is of the same magnitude. The J constant can be used for distinguishing, e.g., between two singlets and one doublet or two doublet and one quartet. [8] There is no effect of the external magnetic field on the coupling constant.

Different types of couplings and their effects on the coupling constant

Geminal coupling: The term Geminal means that 2 atoms or functional groups are bound to the same carbon atom. The geminal or 2-bond coupling constant is denoted by 2J. This also denotes that there are 2 bonds between the hydrogens being coupled.

In some cases, two hydrogen atoms can be attached to the same carbon atom but can be in a completely different electronic environment which gives rise to different chemical shifts. These protons are known as Geminal protons. Let us look at the molecule below: 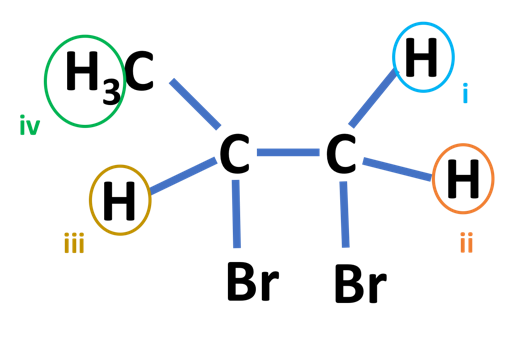 According to the definition of Geminal protons, protons I and II are geminal protons, as they are attached to the same carbon atom, however, their electronic environments are different.

Vicinal Coupling:  Vicinal protons are those which are separated by three bonds. In the molecule shown above, ii and iii are vicinal protons. The vicinal or 3 bond coupling constants are denoted by 3J. The hydrogen atoms are on the adjacent carbon atoms in vicinal coupling. [11][12]

Long range coupling:  If the distance between two protons is more than 3 covalent bonds, then, the phenomenon of coupling does not come into play.

However, there would be some coupling if there are unsaturated or fluoro compounds present in the vicinity of the protons. Such type of coupling can only be observed using a very sensitive and high-resolution NMR spectrophotometer (e.g. the 600 MHz Bruker Avance Spectrometer). [13]

It may sometimes happen that each peak in a doublet (in an NMR spectrum) is further split into another peak. 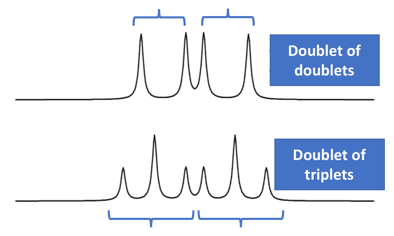 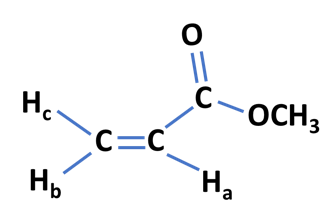 It is important to note that Hc is coupled to both Ha and Hb but having different coupling constants. This is why each line in the doublet would further split into another doublet.

The resonating protons in a molecule are depicted as a series of peaks in the NMR spectrum. This physical interaction between the spinning nuclei is much more complex.

The nature of the peaks and the position on the chemical shift scale is dependent on the electronic environment and the phenomenon of spin-spin coupling comes into play. The peaks are further split due to factors such as bonds and bond angles.

The phenomenon of spin-spin coupling and the resulting coupling constant provides additional information which is very useful in elucidating the structure of the molecule under study.