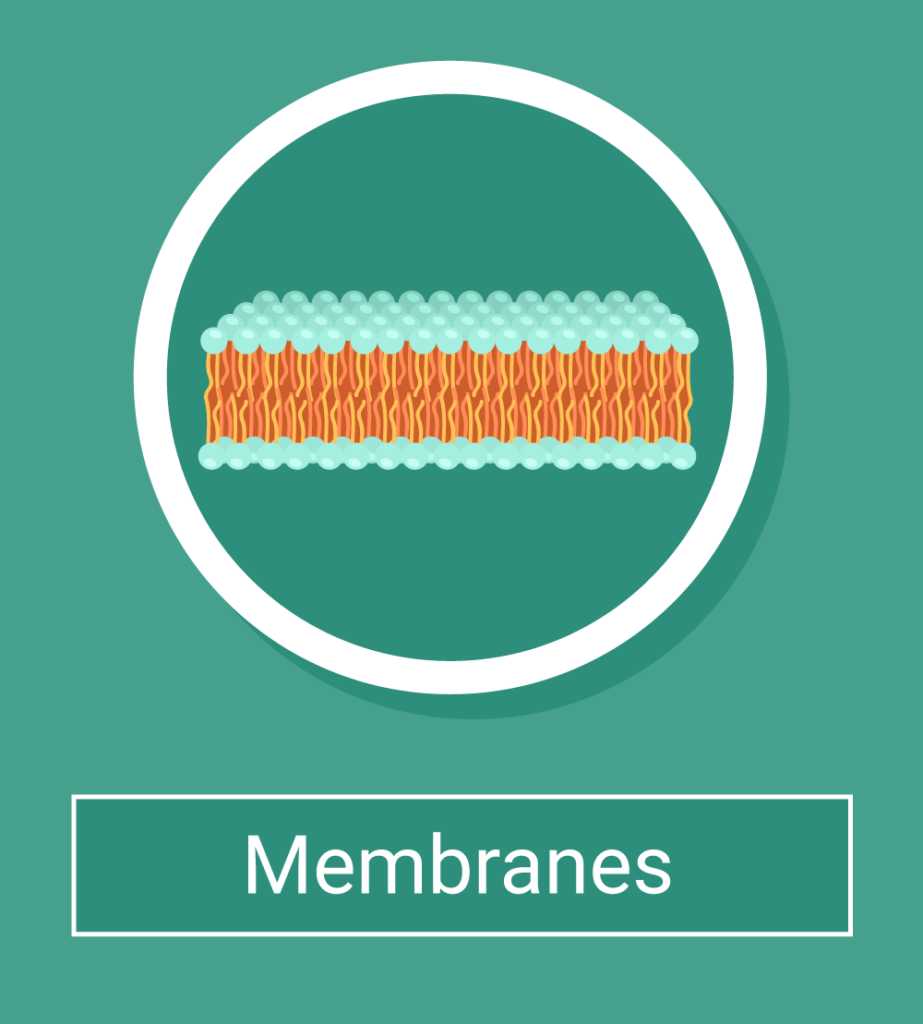 The membrane’s ability to control the transport of materials across the membrane is one of the essential life processes in organisms. The membrane determines what solutes shall enter or leave the cell, which involves complex structures functioning in the transfer of molecules across the membrane. And any mutation or malfunction in this transport mechanism leads to severe life-threatening diseases.

The transport of essential molecules is a series of reactions regulated by the complex interaction between the macromolecules that make up the membrane. These macromolecules are proteins, lipids, and carbohydrates.

The biological membrane is semipermeable, meaning it allows the transport of only a few molecules, ions, and water across the membrane. And its permeability for the molecules varies in different organisms based on the structural pattern of the lipid bilayer.[1]

The bilayer constitutes the membrane’s hydrophobic core, approximately 40 Å (4 nm) thick.[1] The integrated proteins spanning the membrane form the carrier and channel transport vehicle involved in catalyzing the translocation of solutes across biological membranes. These solutes include ions, nutrients, neurotransmitters, and numerous drugs.[2]

The transport of these essential biological molecules across the membrane is classified into two categories:

Image: An illustration of the basic types of membrane transport: simple passive diffusion, facilitated diffusion (by channels and carriers), and active transport.

Any mutation in molecules building the membrane transporters or involved in the transport mechanism can cause severe diseases like autism, epilepsy, migraine, depression, drug abuse, and cystic fibrosis.[2]

What Is Active Transport?

Some examples of active transport include the uptake of glucose in the intestine of the human body and the uptake of minerals or ions into the root hair cells of plants.[3]

Primary active transport is also known as direct active or uniport transport. In this form of transport, molecules are transported across the membrane by breaking down adenosine triphosphate (ATP).

Molecules transported through this mechanism include ions such as Na+, K+, Mg2+, and Ca2+. Ion pumps or ion channels facilitate the transport of these charged molecules throughout the body.[4]

Image: The illustration of an example of primary active transport across the membrane.

It is also known as E1-E2 ATPases because of their ability to interconvert between two conformations (E1 and E2). They are ion and lipids pumps found in bacteria, archaea, and eukaryotes.[5]

The “P-type” denotes their ability to autophosphorylate the components within the pump, like aspartate and ATP. Structurally, they contain four domains responsible for their functions, which include the Phosphorylation (P) domain, Nucleotide-binding (N) domain, Actuator (A) domain, and Regulatory (R) domain.[5]

For better understanding, let’s have a look at the mechanism of the sodium-potassium pump (Na+/K+-ATPase):[6] 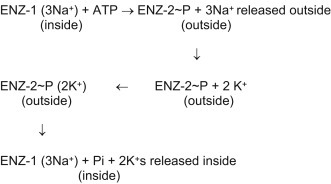 Image: Mechanism of the Na+, K+-ATPase.

In humans, these pumps are involved in diverse functions, including nerve impulses, relaxation of muscles, secretion and absorption in the kidney, absorption of nutrients in the intestine, and other physiological processes.[1]

It is also known as ATP synthase or ATP phosphohydrolase (H+-transporting).[7] These ATPases/synthases are found in mitochondrial inner membranes (in oxidative phosphorylation as Complex V) and chloroplast thylakoid membranes.[7]

It drives ATP synthesis by allowing the passive flux of protons across the membrane down their electrochemical gradient. The energy created during the transfer of protons releases the newly formed ATP from the active site of the F-ATPase.

But under low driving force conditions, these ATP synthases function as ATPases, generating a transmembrane ion gradient at the expense of ATP hydrolysis.

Examples of this transport system include mitochondrial ATP synthase and chloroplast ATP synthase.

The vacuolar proton-translocating ATPases are ATP-driven pumps located in the tonoplast of the cell. The enzyme couples the energy from ATP hydrolysis to transport protons across intracellular and plasma membranes of eukaryotic cells. This function makes multiple cellular organelles more acidic than the surrounding cytoplasm.[8]

Any mutational changes in the enzyme can cause several implications, including cancer, neurodegenerative disease, and aging.[8] 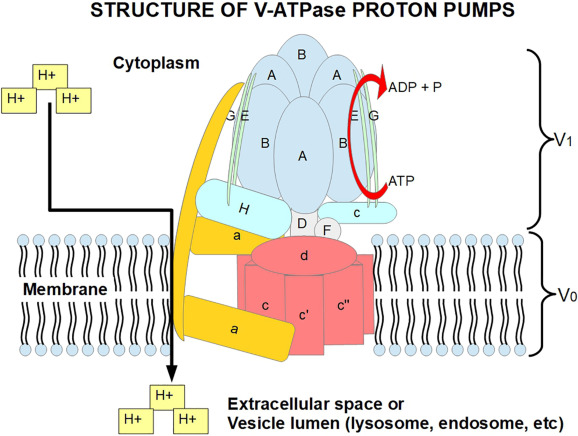 ABC transporters are an extremely diverse class of transporter proteins. It couples energy obtained through ATP hydrolysis to the movement of solutes across biological membranes. It is mainly identified in organisms belonging to the three major domains: bacteria, archaea, and eukarya.[9]

In humans, around 48 ABC genes are reported, among which most of them are related to diseases like cystic fibrosis, adrenoleukodystrophy, Stargardt disease, drug-resistant tumors, Dubin–Johnson syndrome, Byler’s disease, progressive familial intrahepatic cholestasis, X-linked sideroblastic anemia, ataxia, and persistent and hyperinsulinemic hypoglycemia.[10]

The members of this family are involved in several processes such as signal transduction, protein secretion, drug and antibiotic resistance, antigen presentation, bacterial pathogenesis, and sporulation. Its examples include Multidrug Resistance Transporter (MDR) and Cystic fibrosis transmembrane conductance regulator (CFTR).[9]

Secondary active transport is also known as coupled transport or cotransport, and it has two separate functions:[1]

The transport of the first solute or ion (also known as driving ion) is through facilitated diffusion, whose sole purpose is to drive the transfer of the second solute across the membrane against its gradient.[1] 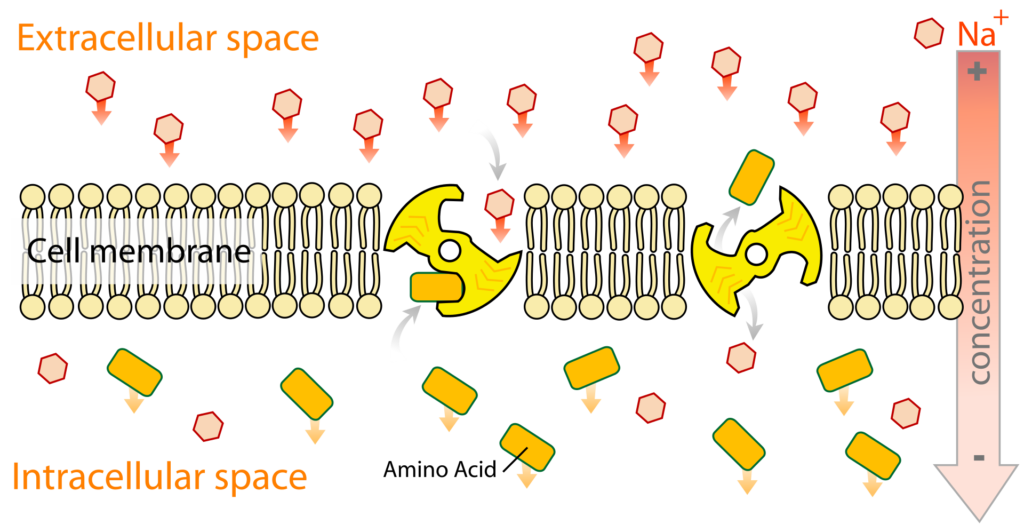 Image: An illustration of secondary active transport across the membrane.

Based on the transfer direction of two molecules/solutes across the membrane, the active transport is classified into two groups: Antiport and Symport.

For example, in Na+/glucose cotransporter, the ratio of the concentration of glucose in and out of the membrane, ([Glucose]i/[Glucose]o), decides the capacity of the transporter in concentrating glucose inside the cell against a concentration gradient.[11]

The concentration capacity is directly proportional to the ion/substrate coupling stoichiometry of transporters per transport cycle.[11]

For example, the coupling stoichiometry of the intestinal Na+/glucose cotransporter is two Na+ ions to one glucose molecule (2:1) per transport cycle. The higher the ion/substrate coupling ratio, the higher the concentration capacity of the transporter.[11] 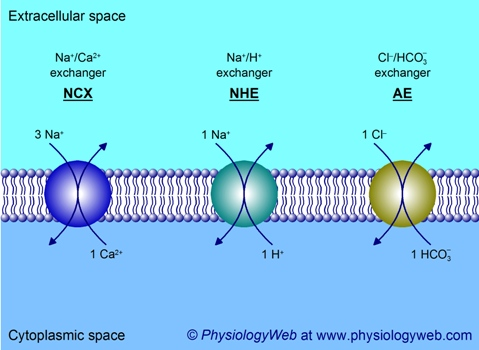 Image: An illustration of the three examples of antiport transport.

Credit: Physiologyweb[11]
Other than primary and secondary active transports, two other processes involving the transfer of molecules against the concentration gradient with energy expenditure include bacterial lactose transport and bulk transport.[11]

Bacterial lactose transport works similarly to secondary active transport.[1] The proton (H+) gradient generated by the bacterial electron transport system drives the lactose uptake (glucose-4-𝛃-D-galactoside) in bacteria. It’s essential to note that taking up lactose is a combination of the electrical gradient and pH gradient.[1]

The transport is performed by lactose permease, a membrane protein that is a member of the major facilitator superfamily. The proteins span the membrane with 12 transmembrane alpha-helices and have a molecular weight of 45,000 Daltons.[1] 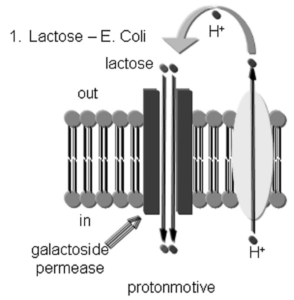 Bulk transport includes endocytosis and exocytosis that uses energy to transport materials across cells via vesicles.

Image: An illustration of different types of endocytosis. Credit: Lumenlearning[12] 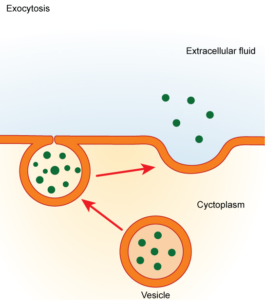 Image: An illustration of the transport of molecules into the extracellular fluid by vesicular fusion with the membrane. Credit: Lumenlearning[12]

Some examples of membrane proteins or transporters that facilitate the transport of molecules include sodium-potassium pumps, ABC transporter, and sodium-coupled bicarbonate cotransporters (NBC).