Capillary electrophoresis (CE) is an analytical technique that separates molecules in a long and narrow silica-fused tube filled with a solution. Similar to other types of electrophoresis, the separation by CE is initiated when voltage is applied to the system, and the separation is conducted under an electric field, resulting in the difference in the mobility of each molecule.[1]

Under the influence of an electric field, molecules in a solution that possess ionizable functional groups are ionized, turning into either positively or negatively charged ions.

The electric force that exists between the two electrodes propels the ions to move towards the opposite charge. The pace at which each ion moves and the electrical mobility, depends on its mass, overall charge, and how the ion interacts with other components in the system.[1,2]

In CE, the electrophoretic separation occurs in a capillary tube of about 25-75µm in diameter. A liquid sample containing molecules to be separated is first injected into the capillary either by applying pressure or high voltage power. After injection, the electric field ionizes the molecules in the sample and forces them to migrate from one end of the capillary tube to the other end.

At the detection window, an area in or outside of the capillary, the presence of the ions are detected using, for example, UV-absorbance, fluorescence, laser-induced fluorescence (LIF), or electrochemistry.

The differences in the electrical mobility of the ion are reflected in the time it takes to migrate to the detection window, this is termed retention time or migration time and is shown as an electropherogram.[3]

Figure 1:  Example of an electropherogram from the sequencing of an unknown DNA fragment by automated capillary electrophoresis.

Capillary electrophoresis uses the same principles as other types of electrophoresis and is subjected to Joule heating, the conversion of electrical energy into thermal energy or heat.[1,2] In electrophoresis, it occurs when the current meets the resistance of the components in the system.

The generated electrical energy is subsequently converted into thermal energy, which heats the fluid in the electrophoresis system.[2,3] The heated fluid diffuses from its source and is replaced by the cooler fluid from the other part of the system. The replacing fluid is heated and subsequently displaced by cooler fluid, creating a cycle of convection currents that continue until heat is evenly distributed throughout the system.[3]

Excessive heat can damage heat-sensitive samples, disrupt the separation and destabilize the system. As a result, the application of high power to the system, which can accelerate the ion mobility and decrease the separation time is generally restrained in electrophoresis.[1]

However, in CE, electrophoresis is performed in a capillary tube, this affords the system with a high surface-to-volume environment. Thus, the distribution and subsequent dissipation of thermal energy are more efficient. It enables CE to be performed in a high electrical power field, and it reduces the separation time without having to compensate for the resolution.[3]

Electroendosmosis Flow Adds to The Speed and Versatility Of CE

Apart from the high surface-to-volume ratio, the capillary also affords CE with a moving force that drives the ion’s migration, in addition to the electrical force. On the interior surface of the capillary, the ionized solution causes the surface to be ionized, and the solvated ions are adsorbed onto the interior wall of the capillary.

The ions on the stern layer, the interior wall of the capillary, attract the ions of the opposite charge in the solution to build up nearby, forming a diffuse layer. Thus, an electrical double layer is formed at the interface of the surface and the solution.

When voltage is applied, the ions at the diffuse layer are pulled towards the electrode of the opposite charge, creating an electroendosmosis flow, also termed electroosmotic flow (EOF) that tows other solvated ions to the same destination, whether their net charge is the same or opposite.

EOF is considered to be a hallmark of CE, which further reduces the separation time and allows all ion species, anions, cations and neutrals, to be separated in a single electrophoresis run.[3,4] 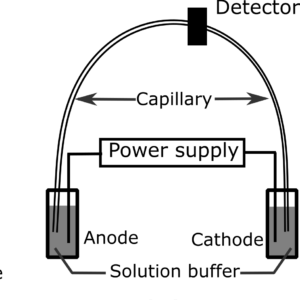 Nowadays, CE is automated and requires very little monitoring, and the basic components in CE have been modified to accommodate it. For example, buffer reservoirs have been added, each sample is placed in a vial in an autosampler that automatically feeds each sample to the analysis.[4]

From an operational perspective, CE instrumentation can be viewed as follows:[3]

Since the capillary is narrow and small, only a small amount of sample is required for CE. Excessive amounts of samples are not only wasteful but may also interfere with the resulting electropherogram, which may be misleading. To ensure good sample injection quality, two methods are used:

2. Separation in the capillary

In CE, the capillary is considered the most important element of the system since this is where the separation takes place. Fused silica is often used in CE because it’s chemically and electrically inert, transparent and flexible, making it the ideal capillary.[3,4]

A part of the capillary where the separation takes place, including the detection window, is typically packed in a cartridge, to ensure that the temperature and the condition of the system are maintained throughout the separation and that external changes will not destabilize the system or interfere with the electrophoresis.

Most capillaries are coated with a layer of protective polymers to ease the handling. Capillaries should be regularly conditioned to ensure that any residual ions on the surface wall are removed and will not interfere with the electrophoresis.[3]

The method of detection in CE is a determinant of the overall sensitivity of the analysis.

Popular detection methods for CE are:[3]

Apart from the main instrumentation, other devices can be added to the CE. For example, a fraction collector can be added to collect fractions of samples for reanalysis, or a mass spectrometer can be connected for structural identification and characterization.

Modes Of Operation in Capillary Electrophoresis

CE is regarded as the most versatile electrophoresis-based technique because it can be easily adapted without a need to change the instrumentation. Instead, it only requires small modifications in the electrophoresis system and alteration in certain operating parameters.

For example, the interior capillary wall can be coated or uncoated to accommodate the nature of molecules in the sample, or certain operating parameters can be adjusted to increase the resolution or decrease the separation time.

The following are popular modes of operation in CE:

CZE has been used to analyze amino acids, peptides, proteins, and other ionizable molecules, including the detection of drugs and drug metabolites in a forensic application. It’s also used in the separation and characterization of polar, non-volatile compounds from environmental samples.[3,4]

While a support matrix is not necessary for CE, the gel in CGE provides a molecular sieve which adds to the resolving power of the technique.[3,5]

CGE has been applied to the analysis of nucleic acids, DNA fragments and protein. Its high resolution, sensitivity, reproducibility and automated nature has made it the technique of choice for Sanger sequencing and for forensic DNA profiling.[3]

Micellar electrokinetic capillary chromatography (MEKC) is the use of surfactant in the running buffer above the critical micelle concentration. The added surfactant induces the formation of micelles in the electrophoresis system.

The interaction between ionized molecules in the sample and the micelles affects the separation time, enabling positively, negatively, and neutrally-charged ions to be eluted at different retention time.[3,4]

Since MEKC can be used to separate and obtain all ion species, it has been used for a wide range of molecules, including forensic analysis of illicit compounds.[3]

Capillary isoelectric focusing (CIF) is the separation of amphoteric molecules such as peptides and proteins based on their isoelectric point (pI) using CE. Here, the acidic buffer is placed at the anode and the basic buffer at the cathode.

The capillary is filled with a mixture of the running buffer and amphoteric molecules before an electrical field is applied to establish a pH gradient in the capillary.

Amphoteric molecules migrate through the gradient until they reach the point where the pH is equal to their pI. Detection is then performed when all molecules have successfully migrated.[3]

Despite the need for sophisticated instrumentation, the sensitivity, speed and automated nature of CE enable it to accommodate high-throughput analysis, without sacrificing the resolution, making it an all-around tool that applies to both research and routine works.