The Tower of Hanoi is a simple mathematical puzzle often employed for the assessment of problem-solving and in the evaluation of frontal lobe deficits. The task allows researchers to observe the participant’s moves and problem-solving ability, which reflect the individual’s ability to solve simple real-world problems.

The ConductScience Digital Health Mobile Assessments utilizes the Apple ResearchKit™ framework to define a large number of predefined tasks in six broad categories: motor activities, fitness, cognition, voice, audio, and hand dexterity. We utilize these functions for your use in your study, making it easy to capture objectively reported data from your patients.

The Tower of Hanoi is a simple mathematical puzzle often employed for the assessment of problem-solving and in the evaluation of frontal lobe deficits. The task allows researchers to observe the participant’s moves and problem-solving ability, which reflect the individual’s ability to solve simple real-world problems. Deficits in problem-solving ability can have a serious impact on the quality of life of an individual and can also be a sign of impending disorders.

Conventionally, the Tower of Hanoi task uses three pegs and a set number of disks (usually 3) stacked in increasing order of size on the starting peg. The participant must move the disks, one by one, from the start peg to the destination peg using the buffer peg as an aid. The participant has an additional constraint during the task; a larger disk cannot be placed on a smaller disk. The participant must try to solve the puzzle in the minimum possible steps.

This task can be carried out using more disks or pegs to change the difficulty of the task. A derivative of the Tower of Hanoi is the Tower of London task which employs a similar problem-solving requirement.

Apple’s ResearchKit uses the Tower of Hanoi active task to measure the participant’s problem-solving skill by measuring the number of moves. The puzzle is presented through a user-friendly interface on the individual’s iPhone and is solved by moving the entire stack to the highlighted platform. The task ends when the user has solved the puzzle or has conceded defeat.

Balachandar et al., 2015 evaluated the age-related cognitive decline using the Tower of Hanoi task. 24 patients with mild Alzheimer’s were assessed for their planning capabilities. The task was carried out using a varying number of disks (2 to 5 disks). The patients showed extreme difficulty in completing the task and showed significantly poorer performance as the disk numbers were increased.

Yang et al., 2017 assessed the often-neglected neurocognitive functioning in cancer patients with PTSD. The executive function assessment was performed using 3 and 4 disks Tower of Hanoi. In comparison to healthy controls, a significant difference in performance was observed.

Grafman et al., 1992 evaluated the performance of 12 patients with cerebellar atrophy using the 5 disks Tower of Hanoi task. Their performance was compared to healthy controls. Analysis of the scoring revealed that patients with cerebral atrophy performed significantly worse in the task. The patients solved fewer trials of the task and showed more tendency in making illegal moves.

Data collected from the Tower of Hanoi task include the total time taken to solve, the number of moves to solve, and the number of rule violations. Other aspects such as impulsivity to perform the task, eye movements and other observable behaviors can also be recorded by an examiner conducting the task. 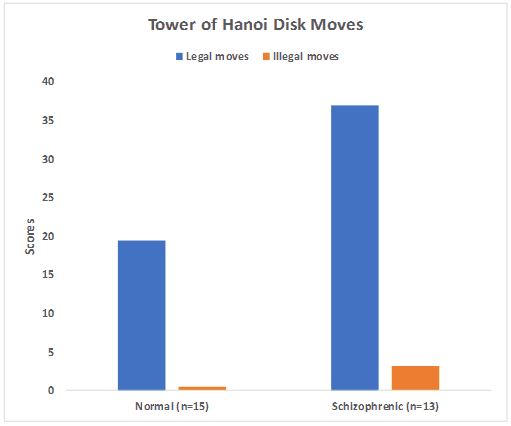 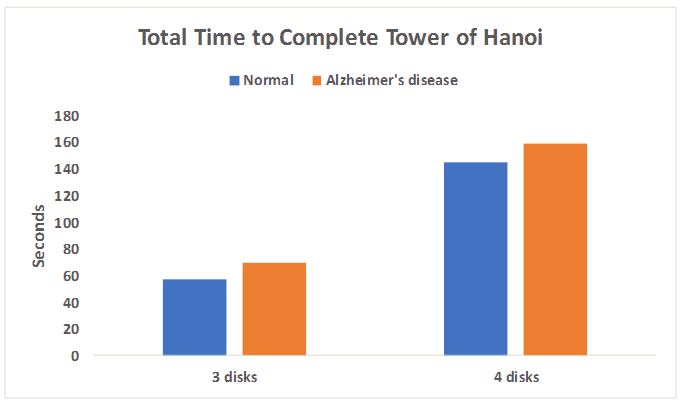 The Tower of Hanoi is a simple mathematical puzzle that can easily assess the problem-solving capabilities of an individual. It is a widely used tool for the evaluation of planning and working memory abilities. The Tower of Hanoi puzzle is sensitive to prefrontal damage and dysfunction. The puzzle’s difficulty level can easily be increased or decreased with additional disks or pegs respectively.

The Tower of Hanoi cannot be used standalone to understand and assess executive functions of the brain. It can be difficult to employ individuals unable to cooperate with the process. Other factors such as sleep, anxiety, may also affect performance.