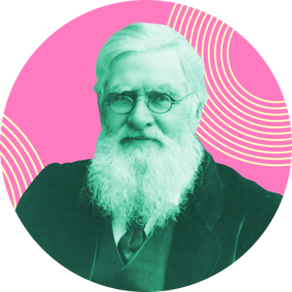 Alfred Russel Wallace is the less well-known co-founder of the theory of evolution by natural selection and history has done a huge disservice in remembering this great scientist. While Darwin took over 40 years to formulate his theory of natural selection, Alfred Russel Wallace came up with the idea completely independently, and upon conversing with Darwin on the topic Darwin published his theory with Wallace’s name as a co-author. Starting life as a welsh surveyor Wallace quickly began to realize his love for the natural world and the organisms within them. He traveled to the Amazon rainforest to improve his methodology and then onto the Malay Archipelago. Here he made another incredible discovery which he named “the Wallace line”, a line across which species’ form, function, and diversity rapidly change. This part of evolution and zoological sciences has been a highly competitive area of research ever since.