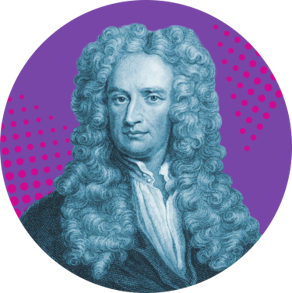 Isaac Newton discovered the laws of gravity as we know them today. The myth says he was inspired into questioning the falling of bodies when hit on the head by an apple falling from a tree and thought that the moon must be held in such a place by a similar force. Using the work of Galileo and Kepler he discovered three laws of gravity. Newton is also considered to be one of history’s best alchemists, while he managed to blow up his laboratory on one occasion, he also claimed to have created the philosopher’s stone and the elixir of life. Newton’s later work turned to light where he discovered white light was made up of a prism of lots of colors. Newton after a long battle was finally heralded as the father of calculus, having studied it early in life but other people claimed it was their research.