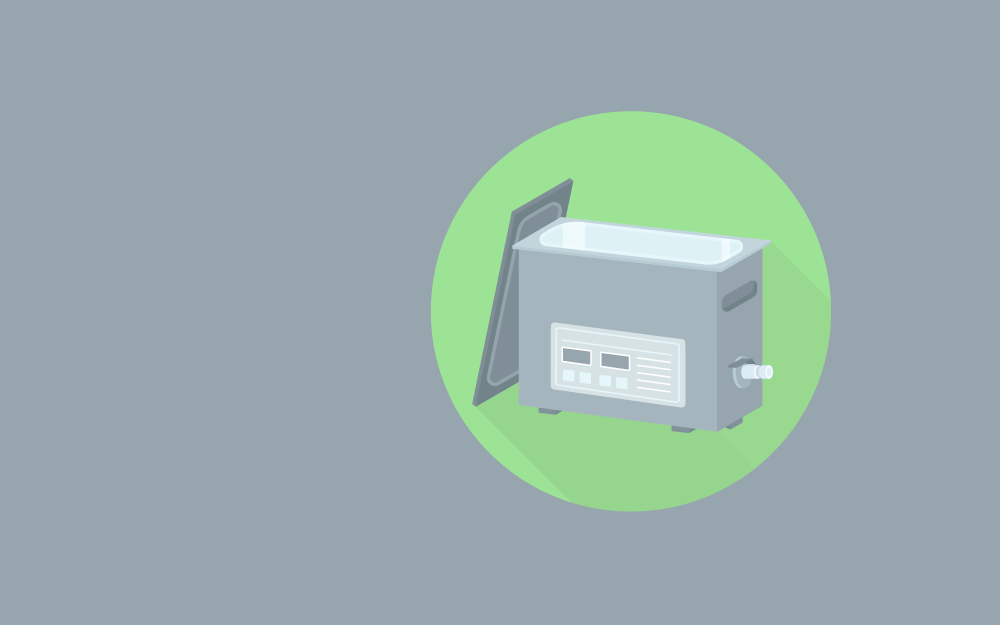 How Do Ultrasonic Cleaners Work?

At the most basic, ultrasonic cleaners consist of:[1-2]

Ultrasonic cleaning technology is considered superior to other cleaning methods. It can remove unwanted particles and destroy contaminants such as viral particles, bacteria, and fungal spores on the item’s surface. The device can clean durable objects like surgical tools, laboratory ware, and delicate items such as jewelry, circuit boards, and silicon wafers.

What Does Ultrasound Do?

Ultrasound is a high-frequency sound wave above 18 kHz, which is inaudible to the human ears. In ultrasonic cleaners, generated ultrasound induces cavitation in the cleaning liquid.[2]

At the compression area, the pressure of the medium is positive and becomes negative during rarefaction. The negative pressure increases as the amplitude increases, leading to a formation of a powerful burst of the jet stream made from vacuum bubbles at the rarefaction area, termed cavitation.

The pressure becomes positive when the molecules enter the compression phase, causing the cavitation bubbles to expand and implode. This implosion results in a staggering increase in the temperature that could generate a shock wave at the implosion site.

How Does Cavitation Assist Cleaning?[2]

Soluble and insoluble molecules in contaminants are held together by non-covalent bonds such as ionic, adhesive, and cohesive forces. Cavitation from ultrasound can interfere with these loose chemical bonds, dissociating these molecules so that each can come into contact with the cleaning solutions.

After cavitation and implosions, the pressure and temperature of the cleaning solution are remarkably high. As a result, chemical reactions at the implosion site are accelerated, including contaminant dissociation.

Ultrasonic cleaners can be categorized based on the cavitation properties as follows:[2]

Apart from the frequency, ultrasonic cleaners are also classified based on construction:[1]

How to Operate Ultrasonic Cleaners

Ultrasonic cleaners are easy-to-use and do not require specialized training. However, workers should be informed of potential electrical and chemical hazards, safety measures, and precautions that could circumvent any harm to the operator and device.

To prevent damage to items and the cleaner, or harm to the operator:[3]

Factors to Consider When Choosing Your Ultrasonic Cleaners

Apart from the capacity, here are the factors to consider when choosing an ultrasonic cleaner:

High cleaning temperature, ultrasonic power, and low vibrating frequency add to the cavitation intensity. Most ultrasonic cleaners operate at a temperature of 70-80°C and a specific ultrasonic frequency and power. This condition is optimum when water is used as the cleaning medium, and it applies to most durable objects.[2]

Nonetheless, the default condition can be too rough for objects with different materials or contaminants. Consider choosing an ultrasonic cleaning device with adjustable temperature and frequency if it is expected to clean various materials.

The cleaning and rinsing solution are essential to the efficiency of ultrasonic cleaning. They must be compatible with the cleaning device so that they don’t react with the device surface but the contaminations on the item’s surface.

A good cleaning and rinsing solution should be inflammable and free from bleaches or inorganic acids. It shouldn’t be too vicious when diluted to the working concentration so that the effect of cavitation can be maximized.[2]

Need an efficient way to remove contaminants in your lab works? Then check out our ultrasonic cleaner!