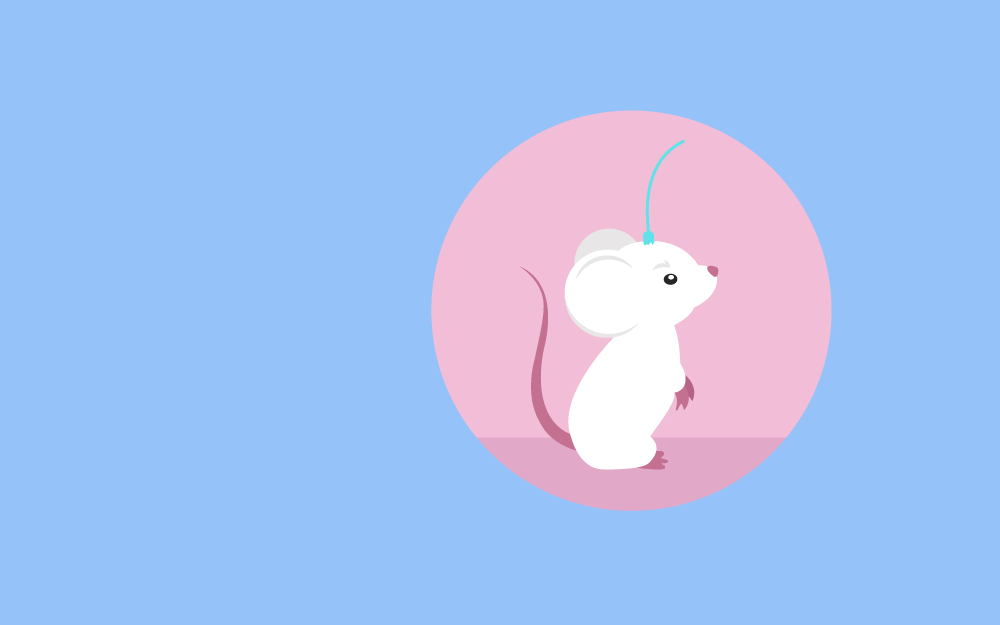 What Is Optogenetics and How Does It Work?

Need optogenetic devices for your lab?

Optogenetics is a method of controlling and monitoring the functions of cells, tissues, and organisms by combining specialized optical systems and genetic engineering technologies.[1]

It is now considered a branch of biotechnology because of its wide use in studying the brain’s neural circuits. Optogenetics is an evolutionary approach, without which understanding brains wouldn’t have been possible!

The technique allows researchers to turn a specific cell or cellular region on and off with precision and high resolution by using a protein called opsin. Thus, enabling them to control animals’ specific behavior (such as pain and fear) and demystifying the involvement of specific cells in controlling those behaviors.[2]

Francis Crick first proposed the concept of optogenetics in 1979 that light can be used to obtain rapid space-time dependent control over targeted neurons.[1] However, the idea wasn’t applied in neuroscience due to the unavailability of advanced tools and methods.

This article discusses how optogenetics works, the tools and techniques required to perform optogenetic experiments, and its application to broad scientific fields.

Researchers require a light-activated ion channel or pump (such as opsins) to provide targeted control over electrical and biochemical events of a cell or specific regions at a particular time.[3]

Opsins have the unique ability to sense and respond to light. It’s categorized into two groups based on its mode of action and primary sequence:[5] 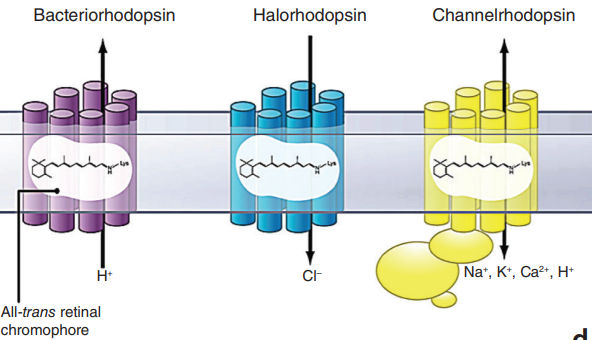 Below are different types of opsins and their purposes:[3]

The nanoparticles and dendrimers are also used in some experiments to deliver the protein in targeted regions. However, it has low transgene expression and delivery efficiency.

The most extensively used gene delivery methods use viral vectors such as adenoviruses, lentiviruses, and adeno-associated viruses – they offer better gene delivery efficiency than plasmid vectors.[1]

A high-throughput integrated fiber optic and light source are required to reach the target cells even deep within the brain. The superficial brain areas can be stimulated by directly mounting optical fibers or LEDs to the animals’ skulls. However, OLEDs (organic light-emitting diodes) are used to implant in the brain because of their thinness – less than 1 µm.[3]

How Does Optogenetics Work?

The optogenetics applied today in scientific studies is composed of three core features [4]:

In optogenetic studies, a specific genetic code of the organism is taken and attached to a protein called opsin.[6] The genetically engineered code is delivered to the targeted cell or tissues to synthesize opsin proteins in the cell. The protein glows on the incidence of a specific light, and that’s how scientists study the neuronal activities in an organism’s specific cell or region.[6]

For example, the opsin, channelrhodopsin-2 (ChR2), obtained from the green algae Chlamydomonas reinhardtii, is activated in the presence of only blue light. Thus, when the protein is delivered to the targeted neuron, it’s activated on the incidence of blue light and deactivated in its absence.[3]

Other neurons not containing opsin proteins will not be affected and will continue to function normally. 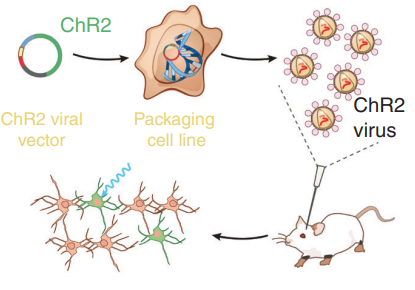 Figure: An illustrative diagram of introducing genetically altered genes with opsin protein ChR2 in a mouse via a viral vector to understand the function of a specific neuron upon incidence of blue light.[4]

Optogenetics has several applications in life sciences, especially neuroscience and neurobiology, where it helps us understand neural circuitry or brain activities underlying diseases and behavior.[1] The technique has replaced untargeted, highly invasive, and slow-kinetic approaches to studying neurons.[1]

Have a look at how the optogenetic technology is involved in the deciphering factors underlying disease conditions, such as Huntington’s disease and Schizophrenia:[3]

Optogenetic is a tool used to understand the specific neuronal function contributing to an organism’s physiology and behavior, such as fear, fight, hunger, and disease conditions, by combining optical technologies and genetic engineering.

It helps map the neural circuitry and provides deeper insight into the role of a brain region or specific neuron in regulating certain behavior or disease conditions by using a protein called opsin. The optogenetic technology has extensive use in neurobiology, cardiology, physiology, and behavioral studies of organisms.

Its use is still developing in many clinical areas, including cardiac and therapeutic conditions. Therefore, current research centers on increasing the efficacy of optogenetic stimulation in clinics.

The development of opsins with increased photosensitivity, suitable light-delivery devices, and bigger model systems (like a pig) will enable the technology to unravel many mysteries related to our brains.

Check out our complete optogenetic system and accessories to assist your experiment if you need a high-quality optogenetic machine.