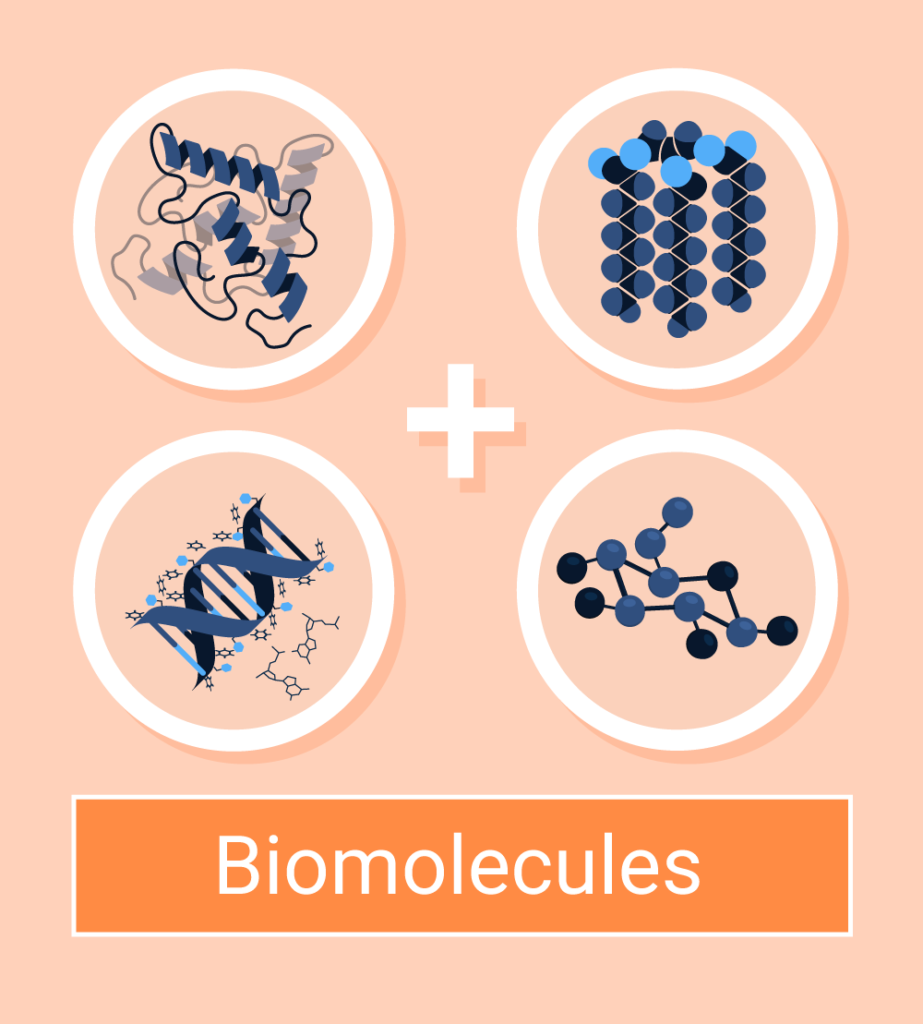 Amino acids are organic compounds consisting of carbon, hydrogen, and nitrogen. They are monomers or building blocks of proteins. Proteins are one of the major biomolecules required for the proper functioning of living organisms. Moreover, they are the first biomolecules that were first recognized for their biological roles in organisms than the other biomolecules including carbohydrates, nucleic acids, and lipids.[1]

Moreover, proteins have well-defined physicochemical properties. The linearly arranged amino acid sequence, or one-dimensional protein, guides the formation of the 3-D structure of the protein that determines its interaction with other molecules.[1]

It’s been a century since the observation that when proteins are exposed to hydrolytic actions of boiling acids, they split up into small molecular substances.[2] The amino acid, Glycine, was first discovered and isolated by scientists from gelatin. Soon after this discovery, other amino acids were unmasked including cystine, asparagine, leucine, and threonine — the last of the 20 common amino acids to be found, in 1935.[2]

Several studies led to the discovery of about 500 amino acids by 1983. But, only 20 were found to be present in the genetic code and considered to be the essential building blocks of proteins.[1]

This article brings you an overview of amino acids (monomeric units of proteins), their structures, functions, and applications in the real world.

1. Classification based on the nutritional requirement

The amino acids not synthesized by the body and required from dietary sources are called essential amino acids. It includes histidine, isoleucine, leucine, lysine, methionine, phenylalanine, threonine, tryptophan, and valine.[4]

They can be obtained from various food sources such as quinoa, egg, meat, chicken, and vegetables.[4] These essential amino acids help the body repair muscle tissues and form precursor molecules for neurotransmitters.

Even though they are produced by the body from scratch, the dietary sources containing these amino acids can enhance their availability and functions in the body.[4]

2. Classification based on the polarity of the side chain

All the amino acids, except proline, are known as alpha-amino acids. Proline contains a secondary amine where an alpha carbon is attached to two other carbons. Thus, it is referred to as the alpha-imino group.

Figure: (a) General structure of alpha-amino acids, and (b) structure of proline showing secondary carbon and imino group.[1]

The amino acids are categorized into three groups based on their side-chain structures:

2.1. Amino acids with nonpolar side chains

Nine amino acids have a non-polar side chain in their structures. These include glycine, alanine, valine, leucine, isoleucine, methionine, proline, phenylalanine, and tryptophan.

While building proteins, the globular proteins bury these hydrophobic amino acids in the interior of their 3-D shape to prevent them from any water contact.[6] 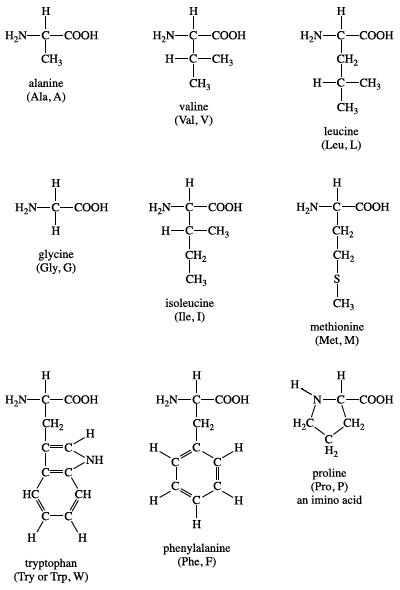 2.2. Amino acids with polar side chains

These amino acids have available electron pairs that are involved in hydrogen bonding with water and other molecules.[6] 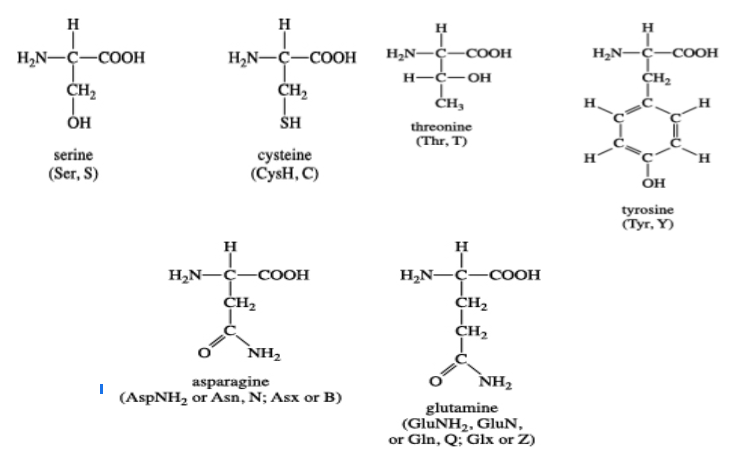 The side chain of these amino acids can be positively charged or negatively charged at physiological pH. It includes lysine, glutamic acid, aspartic acid, histidine, and arginine.[3]

Lysine contains a butylammonium side chain; arginine has a guanidino group; histidine bears imidazolium moiety; glutamic acid and aspartic acid carries a carboxylic acid group on their side chain.[3] 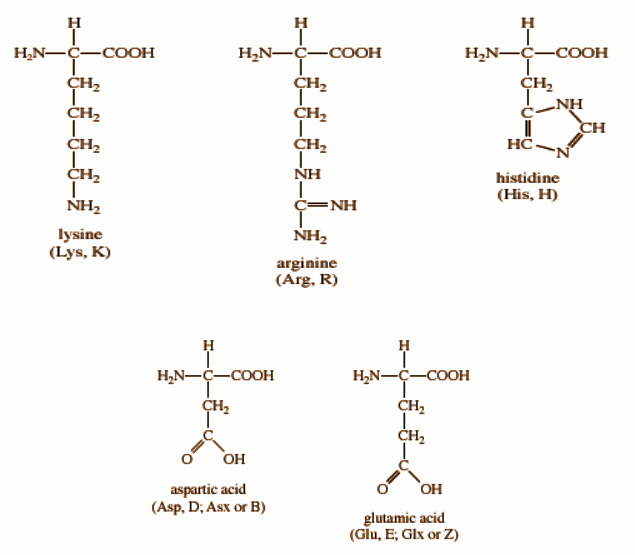 The amino acids possess different physicochemical properties. These include optical activity, polarity, acidity and basicity, aromaticity, confirmation flexibility, and chemical reactivity. Some of the properties are discussed here in brief.

All the amino acids exist in L-configuration and are superimposable mirror images of each other. This configuration was given by Emil Fischer.[3] L- configuration represents all amino acids that are majorly involved in the translation process for protein synthesis. In some rare cases, D-amino acids are also found in some proteins. 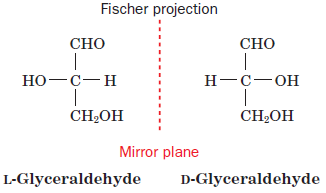 Figure: Fischer convention configuration of glyceraldehyde to which all groups can be related.[3]

The number and type of amino acids linked together to form proteins ultimately determine the shape, size, and function of the proteins.[7] The amino acids are covalently attached through a peptide bond, which is a result of a condensation reaction.

The carboxyl group of one amino acid combines with the amino group of another amino acid releasing a water molecule, this reaction is called a dehydration or condensation reaction.[7] 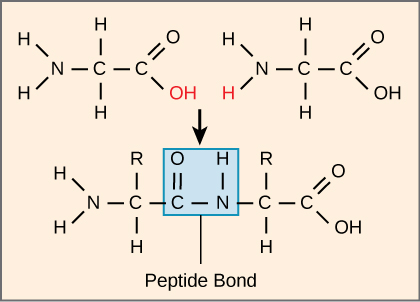 Figure: Peptide bond formation between two amino acids with the release of a water molecule.[7]

It’s also essential to note that an individual amino acid possesses acid-base properties, which are lost in proteins because of the involvement of the carboxyl group in the peptide bond formation. So, the acidity-basicity of proteins depends on the overall ionization characteristics of individual R groups of the amino acid components.

Amino acids, except glycine, isolated after mild hydrolysis of protein can rotate plane-polarized light. This property is known as optical activity. The optically active molecules possess chiral carbons, having four different groups attached to a carbon, called a chiral center.[3]

The asymmetry due to chiral carbons results in non-superimposable mirror images of the molecule, called enantiomers. Glycine has two hydrogens attached to its alpha-carbon and is therefore not optically active.

Amino acids are amphoteric molecules, as they can either act as an acid or a base. The acidity and basicity of amino acids are due to charges either on their carboxyl or amino groups.[6]

The pKa value of the basic amino group is between 9 and 10 while that of an acidic carboxyl group is close to 2. The pKa value indicates the strength of amino acids. It is defined as the negative base (-10) log of the acid dissociation constant (Ka) of a solution.

The pKa is also defined as the pH value at which the concentration of protonated group is equal to that of the unprotonated group.[6] So, at physiological pH, the amino acids have a balanced charge, equal number of negative and positive charges, on their structure and are called dipolar ion or zwitterion. The pH at which this phenomenon occurs is called the isoelectric point, donated by pI.

Figure: (1) General structure of amino acid, and (2) its zwitterionic form.[1]

Note: At the isoelectric point, amino acids have a net-zero charge but amino acids are never considered to have an absolute zero charge.[6] Moreover, in an aqueous solution, amino acids never assume a neutral form.

The amino acids undergo several reactions by involving their functional groups. Some chemical reaction processes of amino acids are given below: 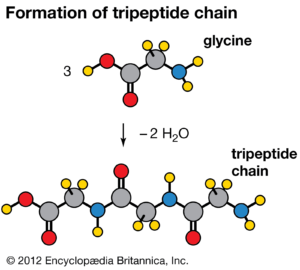 All amino acids have some central role to play in the body’s metabolism and functioning. So, given below is a list of essential functions performed by some amino acids:

Amino acids have a variety of application in industries, some of them are listed below:

Today, several tools are present to isolate and study amino acids in labs. The advanced technology has facilitated the sequencing of every protein to study from their basic unit, that is, the amino acid. Scientists are meticulously developing several other tools to tackle the challenges faced during the study of these molecules. The area of amino acid and protein research creates an intriguing possibility to discover and uncover several other mysterious properties of these amino acids and their functions in organisms.