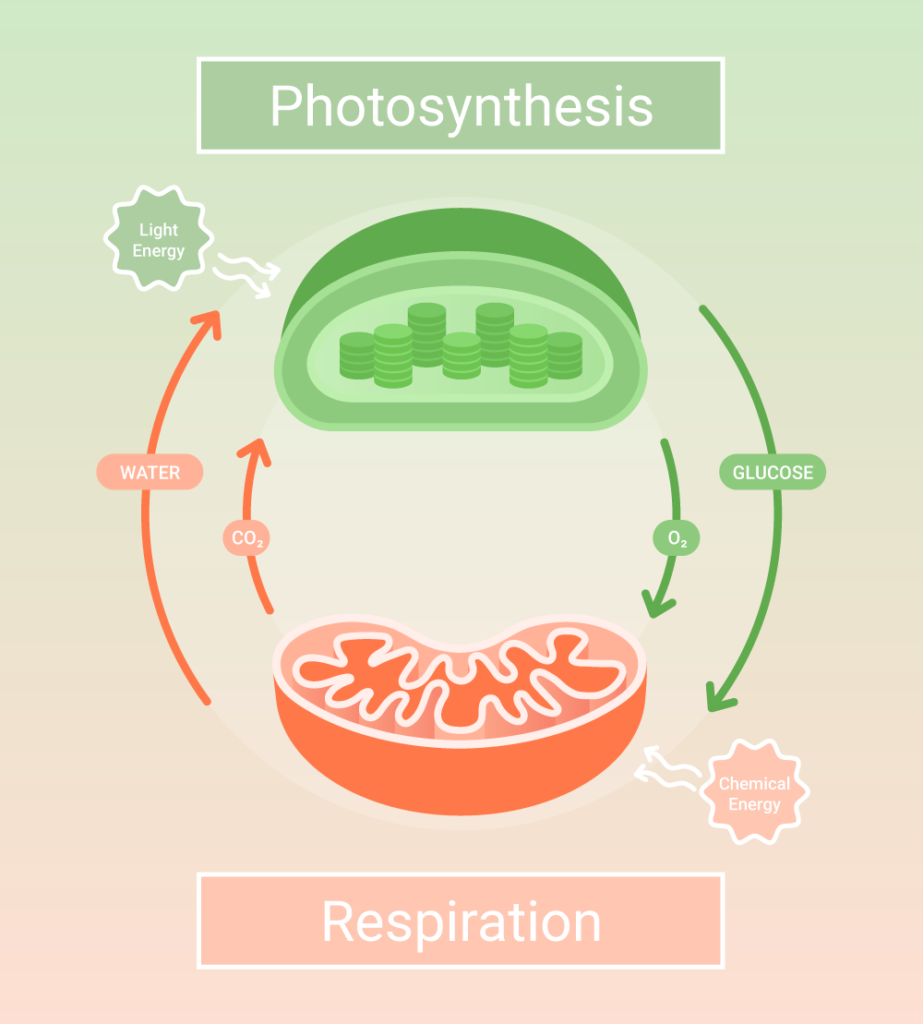 Clark Oxygen Electrode is a silver-platinum electrochemical cell whose electrodes are covered by non-conductive membranes. They are used to measure gaseous or solubilized oxygen in the liquid.

Clark oxygen electrodes rely on the limited permeability to oxygen of non-conductive membranes, which reduces oxygen loss at the electrodes and allows the quantification in circulating blood.

The Clark electrodes are one of the inventions that become the basis of modern blood gas analyzers, which quantify the blood pH, oxygen, and carbon dioxide level in vitro and in vivo.

The same principle used for Clark oxygen electrodes has been adapted to build other gas measuring devices and biochemical sensors for medical, agricultural, and other industrial applications.

How Does the Clark Electrode Work?

Two electrodes, called the anode and cathode, are immersed in a chloride solution, or electrolyte. When an electric current is applied, electrochemical reactions take place on the surface of either electrode, altering the electrical characteristics of the components in the solution between the two electrodes.

Changes in electrical current in the component of interest can be measured and compared with known standards, enabling the quantification of the ion or molecules of interest.[1-2]

The predecessor of the Clark electrodes consists of two electrodes made from silver (Ag) and bare platinum wire (Pt).

Both electrodes are immersed in saturated potassium chloride (KCl) solution. The silver electrode serves as the anode and reference electrode. The platinum electrode is naked and acts as the cathode, which is in direct contact with the fluid of interest, whose oxygen level is being measured.

When an electric current of known magnitude is applied to the electrode, the ions in the KCl solution become an electrolyte, forming chloride and other ions. Simultaneously, the following reactions take place at the surface of the electrodes:

Here, the Ag-electrode is oxidized into silver ions. Subsequently, silver ions interact with chloride ions from the electrolyte, forming silver chloride (AgCl). The resulting electrons participate in a reduction of oxygen at the Pt-cathode.

Here, the Pt-electrode acts as a catalyst, reducing the dissolved oxygen in the sample to water. The reaction consumes electrons generated at the anode.

The combined reactions at either electrode can be expressed as:

The net reaction between both electrodes can be summarized into:

The electron flow between the electrodes generates a current, which is in direct proportion to the partial pressure of oxygen (pO2) dissolved in the sample. In medicine, this is referred to as the oxygen tension, which reflects the level of oxygen in the arterial blood.[2-3]

Improvements in the Clark Electrode

While the predecessor of Clark electrodes can quantify oxygen in the blood both in vitro and in vivo, there were some limitations in the use of naked platinum cathodes.

First and foremost, the electrochemical reactions consume high oxygen at the electrodes due to the unrestricted oxygen diffusion rate. Thus, the quantification of oxygen levels is often inaccurate and requires rapid continuous fluid flow to allow frequent contact of fresh samples with the electrodes.

Another major limitation is when Clark electrodes’ predecessor is used to measure oxygen in tissues of living organisms. Specifically, the naked platinum cathode does not restrict cellular proteins and other non-target components from participating in chemical reactions on its surface.

As a result, unintended reactions can alter the characteristics of these cellular components, which not only interferes with the measurement but can also poison the tissue or organism.[3-4] 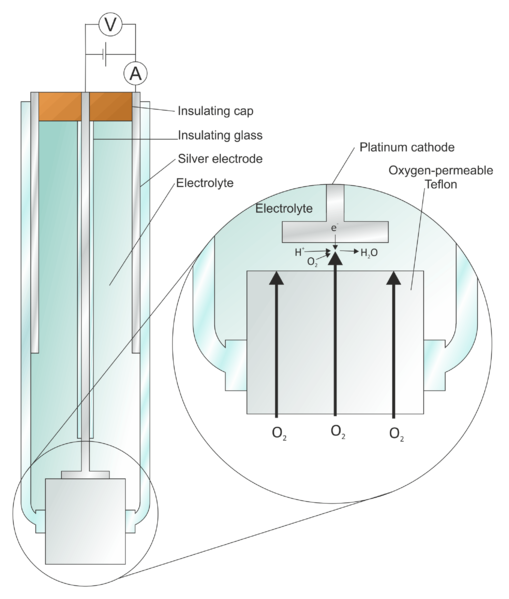 To address such limitations, Leland C. Clark Jr. used non-conductive membranes to shield the cathode and sealed both electrodes in an insulated glass tube.

The non-conductive membranes such as polyethylene, polytetrafluoroethylene (Teflon), and cellophane are semi-permeable. They only allow oxygen and other permeable molecules in the sample to pass through the membrane.

Consequently, the membrane serves as a barrier that bars non-target molecules from reaching the cathode. As a result, non-target reactions on the surface of the platinum cathode are eliminated, reducing the measurement errors and damage to living cells.

At the same time, the addition of non-conductive membranes also traps oxygen molecules at the cathode after they pass through the membrane. This way, oxygen diffusion is reduced, enhancing the accuracy of the measurement.[3-4]

Applications of the Clark Electrode

The Clark electrode was first invented as a medical device that continuously monitors oxygen levels during medical procedures such as cardiovascular surgery.

Nowadays, the Clark oxygen electrode has been adapted to measure the oxygen level in other applications.

However, the Clark electrode has also been modified or combined with other types of electrodes in many fluid-measuring devices.

In the glucose biosensor, the enzyme glucose oxidase (GOx) is trapped between two semi-permeable dialysis membranes. The first membrane next to the electrode is permeable to hydrogen peroxide (H2O2). The other membrane, which is permeable to glucose, is in direct contact with the sample.

The enzyme GOx catalyzes an oxidoreduction reaction, using glucose and oxygen as substrates. When glucose and oxygen diffuse from the sample and pass through the first dialysis membrane, GOx oxidizes glucose, transforming it into gluconic acid.

Simultaneously, oxygen is reduced to H2O2, which passes through the second dialysis membrane to the platinum electrode. At the surface of the platinum anode, H2O2 is oxidized to oxygen, which resupplies the GOx-catalyzed reaction.

At the same time, the electrons from H2O2-oxidation flow to the silver cathode, reducing it to silver ions.

The GOx-catalyzed oxidoreduction occurs continuously as long as glucose and oxygen are present. Ultimately, the level of glucose can be calculated from the number of oxygen consumed.

GOx-based enzyme electrode is regarded as the first biosensor. Since its conception, many biosensors have been developed to measure glucose levels and other components in body fluids.

Modern-day biosensors often use other oxidases and contain additional elements. Nevertheless, most of them are based on the same principle as the GOx-based enzyme electrode.[7]

Limitations of the Clark Electrode

Compared to its predecessor, the Clark electrode greatly improves the accuracy in oxygen quantification and is adaptable for the measurement of various biologically relevant fluids.

The Clark electrode is dependent on the presence of oxygen. In other words, the accuracy of the measurement using Clark electrode or biosensors modified from it relies on oxygen, which can be difficult in cases of samples with small volumes, large surface areas, or changing temperature.

In addition, oxygen can also interfere with the measurement, causing measurement or sensor errors. For example, gas bubbles in the electrolyte arising from leaking glass tubes can change the concentration of the fluid between the two electrodes.[8-9]

The Clark electrode relies on the interaction between the electrolytes and the electrodes. This implies that water is necessary for the redox reactions to initiate. As such, this electrode is only applicable to hydrophilic or amphiphilic fluids.

All in all, the Clark electrode addresses the limitations of its predecessor by introducing non-conductive membranes to the cathode, which lessens the rate of oxygen diffusion.

Originally conceived as a medical device, the Clark electrodes have been adapted for non-medical uses. It is also the foundation of modern-day gas measuring devices and biosensors, which not only measures oxygen but also other biologically relevant molecules.