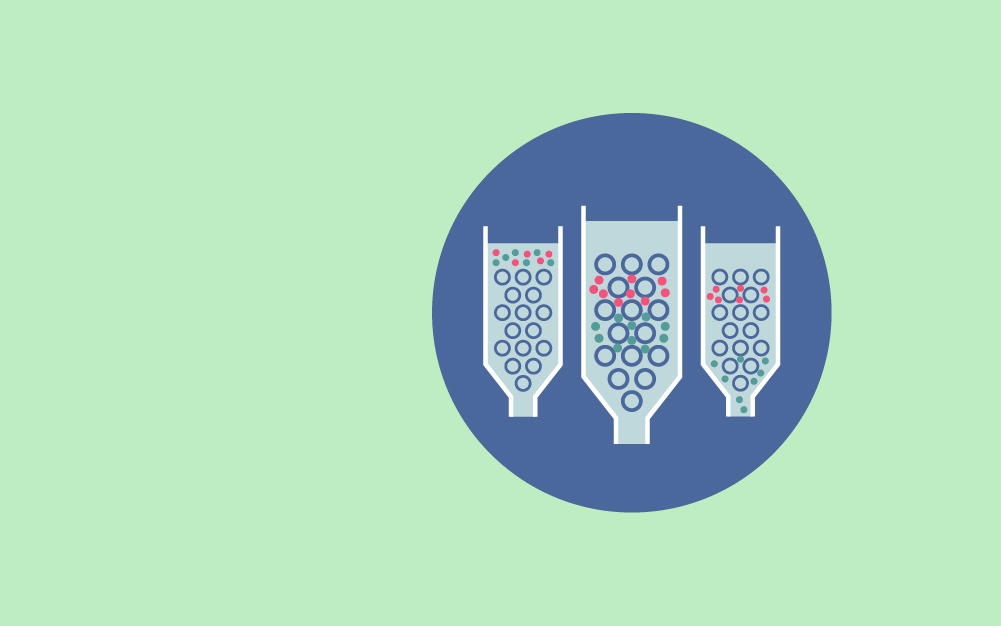 Need benchtop equipment for your lab?

Gel-filtration chromatography, also known as size exclusion chromatography, is a versatile technique that permits the separation of proteins and other biological molecules. The gel filtration chromatography separates the proteins solely based on molecular size differences. For this, a porous matrix is used to which the molecules, for steric reasons, have different degrees of access. The matrix is enclosed in a chromatographic column, and the separation is accomplished by passing an aqueous buffer through the column. The molecules, confined outside the matrix beads, sweeps through the column by the mobile phase. An in-line UV monitor detects the separated protein zones and the fractions of the sample are collected for subsequent specific analysis. The gel-filtration chromatography has numerous applications including the fractionation of proteins and other water-soluble polymers, size determination and analysis, desalting, and buffer exchange.

The gel filtration chromatography is based on the molecular size and the hydrodynamic volume of the components. The molecules are separated by the differential exclusion or inclusion of solutes as they pass through the stationary phase containing heterosporous cross-linked polymeric gel or beads. Different permeation rates of the solute molecules cause them to sift in the interior of the gel particles. A column of the porous matrix is in equilibrium with the mobile phase for the separation of the molecules. Large molecules are entirely excluded from the pores and come first in the effluent. Smaller molecules get distributed between the mobile phase and the outside of the sieve. Then, they pass through the column at a slower rate and appear later in the effluent.

The gel filtration medium is enclosed in a column making a packed bed. The medium consists of a porous matrix selected on the basis of inertness and physical and chemical properties. The pores of the matrix are filled with the buffer equilibrated with the packed bed. The liquid inside the pores is referred to as the stationary phase and the liquid outside as the mobile phase. The signals from the column are taken by the detector, and the calculations are made.

Prepare and test the system

Assessment of the anticoagulant properties of heparin (Andersson. et al., 1976)

Heparin is an essential anti-coagulation protein that is activated by antithrombin III. Heparin could also affect coagulation and is critical for the studies regarding coagulation and anti-coagulation processes. In addition to thrombin, it inhibits the activated forms of other coagulation factors such as IX, X, and XI. In the study, a sample of heparin was fractionated using affinity chromatography on matrix-bound antithrombin III. The obtained fractions and sub-fractions were separated by gel filtration based on their molecular weights. It was found that about one-third of the heparin was bound to antithrombin and this fraction is responsible for 85% of the total anti-coagulation activity, measured in terms of thrombin inactivation. The results suggested that the antithrombin in the presence of heparin blocks several stages in the coagulation cascade. The fractionation of protein by gel-filtration chromatography enables the assessment of protein cascades involved in physiological processes.

The permeability of the plant cell wall determines the ability of enzymes, polysaccharides, and extracellular glycoproteins to penetrate and alter the cell wall. The cell wall permeability could limit the macromolecules to alter the biochemical and physical properties of the wall. Gel-filtration chromatography enabled the detection of permeation of macromolecules into the cell wall matrix even at much lower concentrations. Using proteins of known size, a column packed with isolated cell wall fragments was calibrated, and the degree of protein penetration was measured.  The results showed that the proteins having a molecular weight, of 40,000 to 60,000 could penetrate a substantial portion of the cell wall space. Gel-filtration chromatography is a powerful separation technique for the estimation of plant cell wall permeability.

The plasma levels of high-density lipoprotein (HDL) cholesterol are crucial to the incidence of cardiovascular disease. The modern proteomic technologies have identified 50 distinct proteins associated with HDL particles implicating the role of HDL in non-lipid transport processes. High-resolution size exclusion chromatography was used to fractionate normal human plasma to 17 phospholipid-containing sub-fractions. Then, the proteins were identified using a phospholipid-binding resin by electrospray ionization mass spectrometry. The identified proteins along with the HDL were found to be involved in complement regulation and protease inhibition. The technique allowed the visualization of HDL protein distribution across particle size with a higher resolution.

Analysis of protein biotherapeutics and their aggregates (Hong., Koza., & Bouvier., 2012)

Gel-filtration chromatography has been widely used not only to purify proteins but also to determine the sizes and relative distribution of macromolecules. The size-exclusion chromatography (SEC) is mainly used for routine and validated analyses because of the speed and reproducibility of the technique. The introduction of biologic-based therapeutics and associated protein aggregates have also been studied using the SEC. It has enabled the quantitation of dimers, trimers, and higher-order aggregates for biologic-based therapies including insulin, recombinant human growth hormone, and monoclonal antibodies. The size-exclusion chromatography has been found the most accurate technique for the analysis of proteins, aggregates, and biotherapeutics.