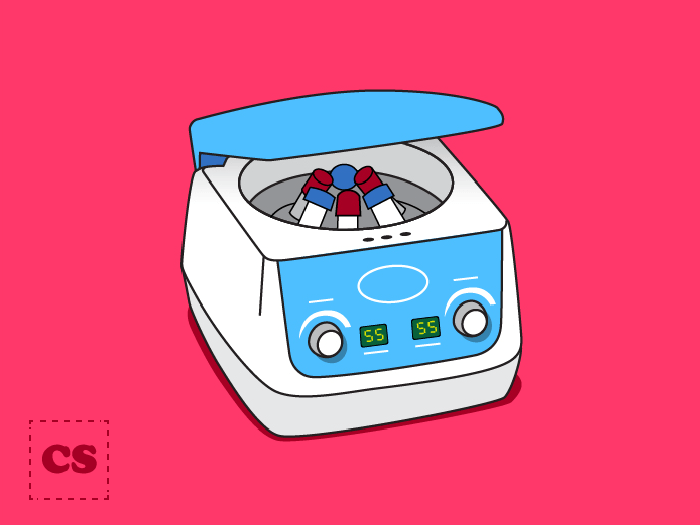 Mini centrifuges are benchtop centrifuges that aim to fulfill the centrifugation requirements of the laboratories with less storage space. These are generally employed for performing quick spin-downs and are typically designed to spin microfuge or PCR tubes. Like all other centrifuges, mini centrifuges are also used in molecular biology, biomedical, and chemical research.

Centrifugation is a substantial technique used in research laboratories to separate and isolate the particles based on their densities and molecular weight. The particles are uniformly distributed in a liquid medium before centrifugation. Mini centrifuges, just like other centrifuges, spin these particles such that lighter particles move upwards, and the heavier or denser particles settle down at the bottom. Following centrifugation, the top liquid fraction that contains lighter particles is called “supernatant,” and the fraction that settles at the bottom is known as “pellet.” The supernatant and the pellet are separated by an interface (Rikkert et al., 2018).

Researchers often work with 2ml or even smaller samples in molecular biology laboratories. It is very complicated and seems impractical to process these samples in larger centrifuge tubes as it increases the risk of sample loss and cross-contamination. Mini centrifuges, specifically designed to resolve this problem spin small samples at incredibly high speed, thus separating their components. In addition, although the benchtop centrifuges complement most researchers’ needs, some might find the size of the machine incommodious to be advantageous. At this point, mini centrifuges have helped the scientists. These compact machines optimize the experimenter’s productivity while occupying less lab space.

Conduct Science offers high-quality mini centrifuges with compact design and easy-to-use processing. Mini microfuge is quite advantageous for spinning up to 8 microfuge and PCR tubes with a sample size of 0.2ml-2.0ml. It can spin at a maximum speed of 6000rpm and RCF of 2000xg. This mini centrifuge has 11.4 x 15 x 11.4 cm (4.5 x 5.9 x 4.5in) dimensions and is very lightweight. The device comes with an additional rotor that can hold 4 PCR strips or 32 x 0.2ml PCR tubes stored in a compact chamber at the bottom of the machine.

The compact design of Horizon Mini E Clinical Centrifuge occupies less than one square foot of space in doctors’ clinics and small-scale laboratories. It has a spinning speed of 3380rpm and RCF of up to 1600xg. With a unique horizontal rotor design and dimensions of 14 x 11.75 x 8.75 inches, this mini clinical centrifuge can contain up to 6 sample tubes.

Different models of mini centrifuges with fixed-angle and swing-out rotors are available and can be customized according to your laboratory needs. These centrifuges are the best centrifugation solution for labs with less space.

Mini centrifuges have various applications in biological research. They are frequently used in environmental, chemical, molecular biology experiments, and biomedical research. These centrifuges are used to spin the PCR master mix and other reagents in PCR laboratories. For instance, Pacifici et al. (2014) used a mini centrifuge for mixing PCR master mix by spinning it at 1500xg for 1 minute. They aimed to perform cerebrospinal fluid microRNA profiling using quantitative real-time PCR. In addition, microfiltration of small water samples, collecting protein or nucleic acid pellet from solution, and gathering the last drops of solution in the bottom of a centrifuge tube can all be accomplished with mini centrifuges.

The primary advantage of mini centrifuges is that they offer a minimal footprint, compact rotor design, and are easy to use. In other words, these centrifuges maximize the experimenter’s productivity while occupying less space. However, despite increasing the general productivity, the yield is small to medium output and is unsuitable for high output labs.

Melissa is the Director of Strategic Operations at ConductScience. She graduated as a Civil Engineer in 2012, from the University of Santa María. Melissa is a highly focused and attentive individual who’s always ready to correct situations or problems, and she’s able to multitask her work very successfully. She looks forward to integrating all of ConductScience operations towards a common goal for all employees and seeing their success.