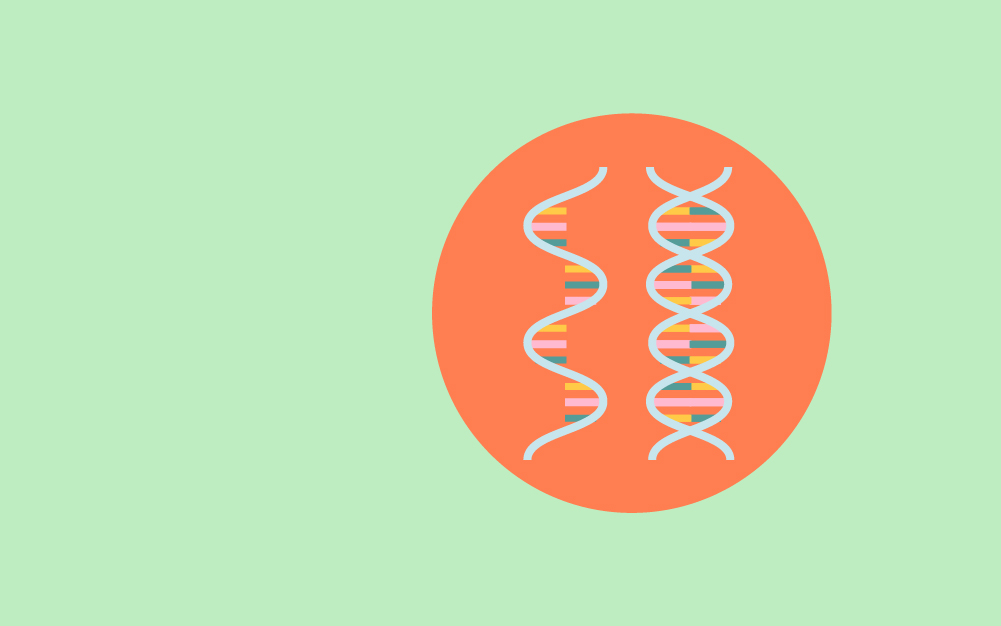 The 𝛾-radiation and its effects on chromosomes

Radiations have been extensively used in medical devices to look into the inner workings of the human body. Wilhelm Roentgen brought a revolution in the medical field by first developing an X-ray machine in 1895 after which, the first radiology department was set up.

After the discovery of X-ray, various scientists such as Henri Becquerel, Marie, and Pierre Curie started working on radiation.

Polonium and radium were discovered by Curie, then, “radium” became an important source of “gamma rays” (which was extensively used in industrial radiography in world war-2, during the US Navy’s shipbuilding program)[1].

After such unrestrained use of radiation by scientists in different technologies, in the 1920s, the mutagenic and killing effects of radiation on humans were first recognized. It took a lot of time to link the connection between the radiation and its deadly effect on human health.

What Are Radiation and Their Types? 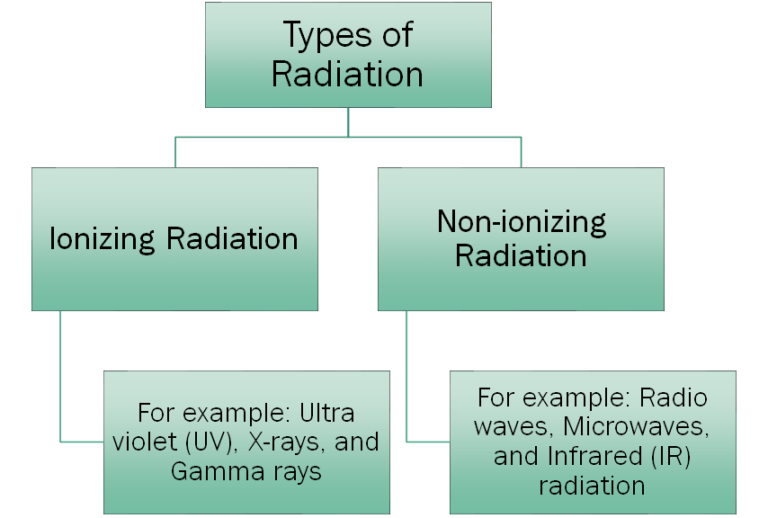 Ionizing radiation is radiation that has so much energy that it can knock out an electron from the atom (ionization). It is a radiation of short wavelength, higher frequency, and higher energy. This type of radiation can cause significant harm to human health.

Non-ionizing radiation does not have enough energy that they can ionize an atom. It is a radiation of the long-wavelength, lower frequency, and lower energy. It causes lesser harm to humans which is generally limited to burn (thermal damage).

Alpha particles are ionizing radiation having two protons and two neutrons, like a helium-4 nucleus. The source of emission of alpha particles is the decay of the heaviest radioactive nuclei such as uranium, actinium, and radium[1].

These particles are highly energized, so, if they come into human contact, they can cause potential harm at the cellular and genetic levels.

Beta particles are tiny, highly energized, and fast-moving electron-like particles having a negative charge. The source of emission of beta particles is the beta decay of elements like carbon-14 and strontium-90[1].

The contact of beta particles with humans generally causes skin burn but inhalation or ingestion of these particles can cause death.

X-rays are electromagnetic radiation of high energy and short wavelength (range from 0.03-3 nm). The source of x-rays can be natural or man-made (medical devices)[1].

This is extensively used in the medical imaging of the inner human body (bone or soft tissues of the body). The effect of the x-ray on the human body depends on the dose taken by the human.

The source of gamma rays includes radioactive decay and nuclear explosions[1]. This ray has very high penetrating potential as it can pass the whole human body and cause severe damage to DNA/chromosomes and tissues.

These rays have extensive use in the medical field as radiation therapy to treat cancer patients[1].

Figure: The image shows the gamma decay of plutonium[1].

Radiation is an essential tool in medical science to diagnose diseases and in treatments (X-ray, CT scan, and radiation therapy). But their lethal effects on humans can not be ignored. These rays can cause severe damage to human tissues by affecting the cellular structure and mutating/damaging DNA/chromosomes.

Sometimes, the ionizing radiation causes mutations and damage to the reproductive cells which are inherited generations after generations. But, the extent of harm also depends upon the doses, period, and the type of radiation the person is exposed to.

Thus, the level/dose of radiation is regulated for use in medical, research, and industrial areas to minimize and control the harm caused by them.

Ways in which gamma rays affect humans are[1]:

These mutations are generally repaired by the repair mechanism of the body. But when misrepair occurs, it causes several mutations, chromosomal aberrations, and cancer.

The biological effect of radiation on humans is classified into two categories[1]:

What Doses of the Radiation Cause Lethal Mutations?

The damage done to the tissue by radiation depends upon the type, quantity, and energy of the radiation absorbed by the person. The radiations generally harm biological tissues when absorbed in a very high amount. But, sometimes high energy radiation even in a small dose can cause severe damage to the person.

The level of harm also depends on what period of time the person was exposed to radiation, as some radiations show late effects. The best example to showcase this concept is the late effect of cancer incidence (including leukemia) among atomic-bomb survivors[2].

The study of the effect of low-dose radiation is of major concern. Several studies show that occupationally exposed individuals to low dose radiation have a higher frequency of DNA/chromosomal damage compared to other normal people.

This exposure can also result in the manipulation of numbers, types, and patterns of gene expression. Various studies are done to find the relation between low doses of radiation and health.

These studies have shown that even a dose of 1cGY-10cGY radiation can cause a disturbance in cellular functioning and changes the expression profile of a few genes[2]. Examples of a few key regulatory genes include TP53, CDKN1A, GADD45A, cyclin B, and cyclin D[2].

It is an absolute requirement to understand the quantification of radiation in relation to its medical effects on humans. It helps to determine a threshold of radiation amount to be used for medical and industrial purposes.

There are four units to measure the radiation and all are inter-related[1]:

Understanding the Dose-effect of Gamma Radiation

A study by Wanwisa Sudprasert et al was done to investigate the effects of low-dose gamma radiation in human blood cells, particularly DNA damage and chromosomal aberration, as follows[2]:

The procedure below,[2] should be followed according to the order (A, B, C, and D/E) in which they outlined.

According to this study,[2] as low as 5 cGy (in lymphocytes) and 10 cGy (in whole blood cells), doses are able to cause DNA strand breaks. Moreover, a dose of even 5 cGy of the gamma radiation was able to cause chromosomal aberrations in the cells. A quadratic dose-response relationship (increased damage by increased doses of radiation) was observed.

How Does the Body Repair the Damages?

DNA is vital for all living organisms because of its role in the storage of genetic information and inheritance. It carries all the information required for the normal functioning of the body. Any mutation in the DNA can alter its functioning and cause genetic instability.

The chemical nature of DNA makes it prone to mutations. It occurs either due to chemical modification of bases by endogenous or exogenous agents or incorporation of incorrect bases during DNA replication.

However, to repair the damages and maintain the integrity of the genome, cells are equipped with complex repair systems. The repair mechanisms of the body repair the mutations and maintain genetic stability.

The four types of DNA repair mechanisms include:

The most extensive DNA repair mechanism used by the body to repair the DNA damage by gamma radiations is “base excision repair (BER)”. In this repair mechanism, the damaged nucleotide base is removed, a short piece of the polynucleotide is excised and DNA polymerase resynthesizes the damaged part.

Genes Involved in Repair Mechanisms and Their Mutation

The cellular response to DNA damage is done by a specific set of genes that are involved in the DNA repair process. This includes: hOGG1 and XRCC1 (X-ray repair cross-complementing gene-1) genes[2].

These genes have different roles to play in the human body but radiation can upregulate and down-regulate these genes and disturb the DNA repair mechanisms[2].

A brief description of the genes is given below:

Ionizing radiation plays an essential role in all branches of medicine include its use in radiation therapy, X-ray, and CT scan. But, besides its use in therapeutics, diagnostic, industrial, and research purposes, its risk to humans is also a major concern.

Exposure to even a small dose of gamma radiation can damage DNA and chromosomes, and the severity of the damage will depend on the type, period, and level of radiation the person is exposed to.

Although cells have repair mechanisms that repair the damage done by the radiation, sometimes, radiation affects the genes involved in the repair system. This leads to the accumulation of mutations in the body and causes several diseases like cancer.