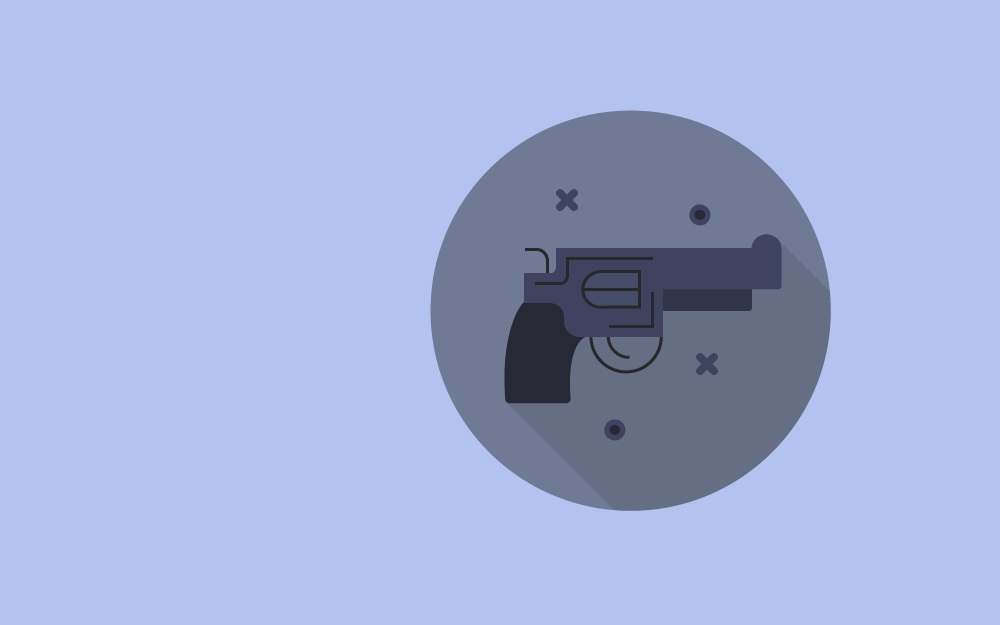 Gun Violence and Gun Control: When Research Shoots Down Myths

Gun violence, defined as a crime committed with the use of firearms, threatens human rights across the globe. From pistols to machine guns, gun violence affects thousands of people and accounts for more than 500 deaths and 2,000 firearm-related injuries every day. Note that even the presence of arms is enough to cause long-term psychological damage to people and communities.

Although easy access to guns correlates with the firearm-related crime, distress, and incidents, the gun industry is booming, with more than 875 million firearms being in circulation across the globe and over 15 billion rounds of ammunition being produced every year. The US, in particular, produced more than 11.5 million rifles, revolvers, and shotguns in 2016. Since the gun industry is expanding and the number of firearm-related tragedies increasing, where does gun control stand?

Gun control and legislation aim to restrict access and use of firearms. Proponents of gun control state that strict regulations can save lives, while opponents claim that guns are an adequate mean for self-defense. In the US, in particular, gun violence has already reached pandemic levels, dividing citizens and policymakers over whether restricting gun control is the sought-after national panacea.

The Truth behind Firearm Violence

Given the high rates of firearm-related deaths, injuries, and incidents, gun control is becoming a hot topic worldwide. The facts speak for themselves; research data collected between 1996 and 2016 from over from 195 nations and 2,500 sources revealed:

In 2016, Brazil, the United States, Mexico, Venezuela, Colombia, and Guatemala produced half of the world’s gun-related deaths; 43,200, 37,200, 15,400, 13,300, 12,800, and 5,090, respectively. The US, in particular, has six times more gun-related homicides than Canada and 16 times more than Germany. Additionally, gun violence results in high societal costs. To provide an example, in the US alone, the total societal cost reached $174 billion in 2010. A review conducted by the Harvard School of Public Health’s Injury Control Research Center shows that gun violence rates across the US are higher than in other countries simply because there are more guns. Note that there are more than 300 million privately owned guns in the US.

While gun violence is a global problem, firearm suicides account for a large fraction of the public health burden of gun mortality. Note that suicide is the leading cause of injury death in the US, with half of all suicides caused by firearms. Gun control regulations can result in a decrease in gun-related suicides. An Australian study revealed that after the Australian government set up a mandatory gun buyback program to reduce the number of firearms, the number of suicides also dropped with up to 74% (Leigh & Neill, 2010). An Israeli study also suggests a drop of 40% in suicides after the military stopped Israeli soldiers from taking their guns home (Lubin et al., 2010). Interestingly, governmental actions can prevent suicides. To provide another example, in 1960, asphyxiation with gas accounted for almost 50% of suicides in England and Wales. When the UK Government switched from the British gas supply to North Sea gas free of carbon monoxide, gas suicides declined. Additionally, in 1995, Sri Lanka had one of the highest rates of suicide in the world, with a large number due to pesticide poisoning. When these pesticides were restricted, suicide rates in Sri Lanka also dropped. Thus, gun control is logically an influential factor in decreasing gun-related suicide rates.

Access to guns often leads to lethal violence. According to an analysis by UC Berkeley’s Franklin Zimring and Gordon Hawkins, the US doesn’t have more crime than other Western industrial nations; yet, the US has more lethal violence due to the prevalence of guns and the lack of adequate gun control policies. Surprisingly, 9% of US citizens who own a gun report impulsive angry behavior (Swanson et al., 2015). Riding with a gun is also a predisposition for aggressive behavior (Hemenway, Vriniotis & Miller, 2006)

The Effects of Gun Violence in Detail

One of the most devastating effects of poor gun control legislation is the effect of gun violence on children and adolescents (1-19 years). Around 2%-7% of all injuries treated at pediatric trauma centers are gun-related. A study showed that in 2016, death by gunshot was the second-highest cause of death among American children (Cunningham et al., 2018). Note that unintentional firearm deaths in children reach 26% of all gun-related deaths. Based on US death certificates from 57 jurisdictions, researchers revealed a 28% increase in the rate of firearm deaths from 2013 to the present. Moreover, the US ranked first in the number of firearm deaths in children. As data links the availability of guns and gun violence, including suicides and unintentional deaths, research and gun control, become paramount.

Inadequate gun control practices affect women worldwide. In fact, in 2017, 87,000 women were intentionally killed. Note that more than 50% were killed by a partner or a family member (UNODC, 2018). Data shows that guns are the main mechanism of intimate partner killings, and gun possession increases the risk of such killings. The presence of a gun can also have a demoralizing effect and lead to sexual violence.

Gun violence impacts minority communities worldwide. Note that in the US alone, young African Americans (15-34 years) are more likely to die from a firearm homicide. Failure to invest in gun violence research and gun control increases these risks.

While gun control opponents claim that people have the right to carry a gun and use it in self-defense, guns threaten people’s basic right, the right to live. At the same time, the presence of firearms is enough to cause psychological traumas and impact people’s right to health and education. Note that in places with high levels of firearm violence, access to health care facilities and education might be restricted. Lack of day-to-day security impacts citizens, especially witnesses and survivors.

Lack of effective gun control regulations often results in firearms trafficking. For example, ballistic technology showed that 70% of gun crimes in Mexico involved firearms bought in the US. In fact, the number of gun-related deaths in Mexico grew from 16% in 1997 to 66% in 2017.

Firearm Violence in the US: A National Epidemic

As guns are deep-rooted in today’s American society, violence and gun control have become controversial topics across the US. According to retrospective analysis, 1.4 million people died from guns between 1968 and 2011. Note that the population of the US accounts only for 4.43% of the global population. Yet, out of the 644 million civilian-owned guns in the world, 42% are owned by American citizens. Interestingly, the leading reasons for owning a gun vary: 67% of people say protection is the main reason, 38% say hunting, 30% sport shooting, 13% gun collection, and 8% their job.

Adjusted data shows that on average, there are 175 intentional injury deaths in the US, with 58% of the total deaths being firearm fatal cases. Opponents of gun control, however, claim that gun-related violence has decreased since the 1990s and therefore, there’s no need for strict gun control regulations. The truth is that gun violence increased from 1900 to 1930 and then rose again through 1990, after which it reached a plateau in the 2000s to the present. In other words, gun-related deaths and injuries still exceed other causes of death. Motor vehicle deaths, in contrast, have declined based on profound research and medical investments.

Even though research can improve gun control legislation and save lives, in 1996, Congress passed the Dickey Amendment (Rostron et al., 2018), which had a detrimental effect on the Centers for Disease Control and prevention-led research on gun-related mortality and morbidity

While gun control is a controversial topic, research data shows that gun control is the key to reducing gun violence. As stated earlier, gun control can reduce homicides, suicides, mass shootings, trafficking, and psychological harm. A review of 130 studies across 10 countries showed that countries with stricter gun control regulations have fewer firearm deaths (Santaella-Tenorio et al., 2016). While gun control opponents keep promoting guns; research shows that legal and local restrictions on purchasing and owning firearms can lead to a decrease in gun violence.

In the US, gun control is a controversial topic, as the Second Amendment protects the private right of people to keep guns. In fact, parties are divided over gun policies. Although majorities of both Democrats and Republicans consider gun violence to be a national problem, data shows that 72% of Republicans favor concealed carry in public places compared to 26% of Democrats. Additionally, 69% of Republicans favor allowing teachers to carry guns in schools compared to 26% of Democrats.

When it comes to legal purchasing, we should note that ¾ of all small arms are in civilian hands and often purchased for legal actions such as sport shooting, hunting, and species management. Yet, gun violence is a fact, and gun control regulations are fundamental to prevent gun-related violence, illegal trade, misuse, and accidents:

Research on gun control and violence can lead to a better understanding and decrease in gun violence. In the US, however, Congress passed an appropriations bill amendment freezing research funding and gun control campaigns. Interestingly, a study identified 10 leading causes of death among children between 1991 and 2010 and used a quasi-experimental differences-in-differences design implemented with log-linear regression models to explore the number of publications and funding trends (Ladapo et al., 2013). Results showed that firearm deaths accounted for 12.6% of deaths but only 0.3% of publications; the volume of publications on firearms was 24.5% (P = .001) compared to other publications. This data shows clearly that research on the topic is lacking.

Physicians should also be given the opportunity to analyze and prevent gun violence. Doctors require gun violence to be treated as a public health issue based on evidence-based interventions (Owen, 2019).  Current US regulations, however, discourage physicians from asking patients about firearms. Given the fact that in 2013, more than 40% of US citizens expressed fear of becoming victims of gun violence; physicians should become active proponents of gun control research and regulations. An action agenda to strengthen research, build public health networks, promote gun safety, engage the private sector, and improve state-level campaigns is needed. Paradoxically, smoking regulations are stricter than gun control legislation.

Social gun cultures should be considered when developing public health strategies in order to engage both proponents and opponents of gun control (Kalesan et al., 2016). In the US, gun ownership was 2.25 times higher among individuals reporting social gun culture (PR=2.25). Note that for every 1% increase in gun ownership, there’s a 1% increase in gun-related homicide rates (Siegel, Ross & King III, 2013)

Gun violence is a global phenomenon affecting millions of people, especially children, women, minorities, and law enforcement officers. Weak laws make it easier to obtain guns illegally or send guns obtained legally into the wrong hands. In fact, analysis shows that 75% of firearms used in mass shootings between 1982 to 2012 were purchased legally.

Although gun violence is a fact and the toll of gun violence is tremendous, gun control opponents and gun lobbying keep claiming that the right to bear arms is fundamental. Interestingly, data shows that gun rights interests have invested more than $43.8 million in political campaigns since 1989, with 90% of funds going to Republicans. Note that in the US, the National Rifle Association is one of the most prominent gun rights group.

Opponents of gun control also claim that people have the right to defend themselves or their property. While personal safety and human rights are crucial, research shows that guns are used to threaten victims far more often than in self-defense (Hemenway, Azrael & Miller). Only 1% of Americans reported using firearms in self-defense, so the myth about the good guy with a gun is simply debunked. In the end, as the right to live is a basic human right, the gun control debate is still open.