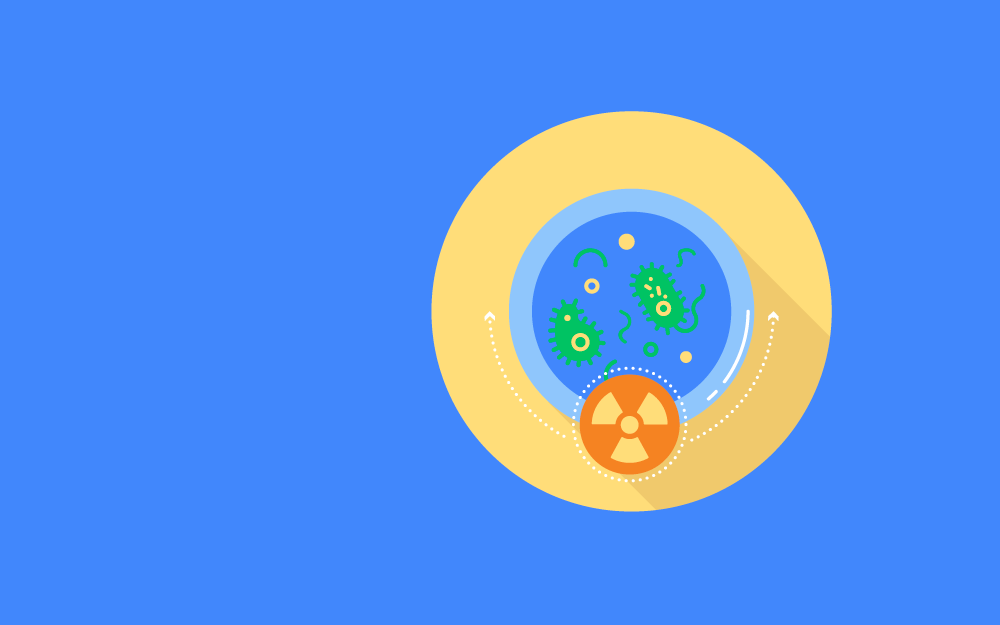 Autoradiography is an imaging technique that uses radioactive sources contained within the exposed sample. In vitro autoradiography methods involve the isolation of cellular components such as DNA, RNA, proteins or lipids, followed by labeling with suitable radioisotopes. In in vivo autoradiography, radioisotopes are coupled with radioactive tracers and administered orally or via injection, and the distribution of radiation is evaluated in thin tissue or whole-body cryosections.  In vivo autoradiography using laboratory animals is widely used in metabolic studies, disease monitoring and new drug development experiments. Common radioisotopes in autoradiography are sulfur-35, hydrogen-3, carbon-14, 125-iodine or phosphorus-32 (35S, 3H, 14C, 125I and 32P, respectively) which are used to determine the distribution of the radiolabeled molecules in tissues, cells or cellular organelles (Figure 1), but also in the study of protein modifications and DNA / RNA sequencing (Figure 2) (Solon, 2015). 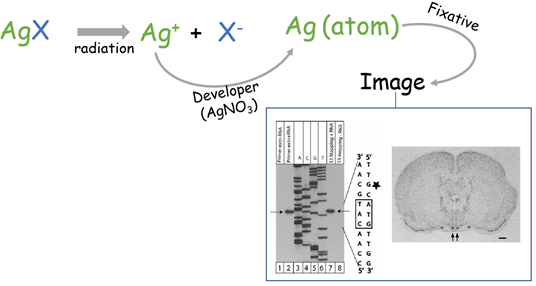 Figure 2: General principle of autoradiography. A silver halide (AgX) is ionized by the radiation emitted from radioisotopes, forming Ag+ ions. Ag+ is then reduced and converted to metallic Ag by a developer reagent (usually containing AgNO3), which precipitates within the gelatin emulsion of the X-ray film. The reduction and precipitation are stopped by emerging the film in a fixative solution forming the final image.

The principle of autoradiographic imaging is the precipitation of silver (Ag) atoms, resulting from the ionization of a silver halide (AgX – silver bromide, chloride, iodide, or fluoride – AgBr, AgCl, AgI, or AgF, respectively) by radiolabeled samples. AgX is light sensitive compound commonly used in photography. They are generally suspended in a gelatin photographic emulsion. Each AgX molecule is individually encapsulated in the gelatin, and functions as an independent detector of radioactive decay from the radiolabeled sample. Once radioactive particles hit the gelatin emulsion, AgX is reduced resulting in the production of insoluble silver crystals.

Gelatin photographic emulsions are used to coat photographic and X-ray films, which are made of a flexible base (usually cellulose acetate). When a radiolabeled sample is in contact within a coated X-ray film (exposure), it generates a latent (hidden) image corresponding to the radioactivity distribution within the sample. To make the image visible, the exposed photographic / X-ray film must be submerged in a developing reagent, a chemical mixture that converts the silver crystals into metallic silver, darkening the gelatin emulsion. Silver nitrate (AgNO3) is highly efficient in the reduction of AgX molecules and is usually a component of developer solutions. The reaction is then stopped by a fixative reagent, which removes the excess AgX from the photographic / X-ray film. Highly radioactive areas (e.g. areas with a higher concentration of a radiolabeled drug, or with higher metabolic activity) reduce more AgX molecules, resulting in higher optical density in the film (darker areas) (Figures 1 and 2) (Cagampang, Piggins, Sheward, Harmar, & Coen, 1998; Klein et al., 2016; Srinivasan, Krebs, & RajBhandary, 2006). Thus, autoradiography must be avoided in samples that are homogeneously labeled. Although it can be quantitative, autoradiography can be a slow process, depending on the half-life of the radioisotopes used.

In a clinical context, advanced autoradiographic methods like positron-emission tomography (PET) and single-photon emission computerized tomography (SPECT) are used in the diagnosis, staging, and monitoring of disease. PET and SPECT rely on the same principle as classic autoradiography but use different radiotracers (suitable for human use) and radioactive decay is detected by gamma cameras (PET / SPECT detectors). Computer algorithms are then used to produce high-resolution 3D reconstructions (tomograms) of the whole body or parts of an organism.

Classic autoradiography techniques are performed according to the following general sequential steps:

When analyzing histological sections, a counterstaining step can be added to the protocol, to identify specific tissue structures or cellular components. For example, hematoxylin and eosin staining can be used to define the nucleus and cytoplasm of cells in tissue sections, after autoradiographic detection.

In both in vivo and in vitro autoradiography, the exposure of the radiolabeled sample to AgX-containing photographic emulsion must always be performed in the dark (e.g., in a dark room, or in closed boxes). Because the AgX is sensitive to light and radiation, this ensures that the only AgX molecules reduced are the ones where radioactivity is emitted from the sample. The resolution of the autoradiographic image is proportional to the ionization capacity of the radioisotopes used. Low energy radioisotopes such as 3H reduce only neighboring silver halide molecules, producing a very sharp image, while high energy isotopes such as 125I can reduce a lot more halide molecules, producing darker images with lower specificity.

Whole-body autoradiography (WBA) and Microautoradiography (MARG) – In vivo autoradiography techniques used to determine the tissue distribution of radiolabeled compounds in laboratory animals (Figure 4) (Solon, 2015). A radiotracer (usually labeled with 14C and/or 3H) is administered and incubated for specific time points. WBA and MARG are especially suitable for the study of receptor biology, as the radioisotopes can be coupled with ligands that are specific to cell membrane receptors. Thus, WBA and MARG provide data on the distribution and activity of cellular receptors, making them exceptional techniques in the study of cell biology and cell signaling mechanisms (Manuel et al., 2015). In microbiology, the MARG method has been combined with fluorescence in situ hybridization (FISH), using specific oligonucleotides (DNA probes) to identify organisms (Figure 5) (Nielsen & Nielsen, 2005).

WBA can be quantified (quantitative WBA) using dosimetry techniques, i.e., comparing the different radioactivity intensities with radioactive standards of known concentrations. An alternative method to QWBA is autoradioluminography, in which whole-body sections are exposed to a phosphor imaging plate, and scanned by a phosphor image scanner (Figure 4) (Solon & Kraus, 2001)

Figure 4 WBA (A) and QWBA (B) of drug distribution in rodents. A – intravenous administration of [14C]-ethanol (Gifford, Espaillat, & Gatley, 2008)darker areas correspond to areas of high ethanol concentration. B – intravenous injection of [3H]-glucose (Potchoiba & Nocerini, 2004). The region of high glucose (radioactivity) concentration is shown in green/blue.

Figure 5: MARG combined with FISH. A–C – the same microscopic view of an activated sludge sample. A– MARG image after incubation of the sample with [14C]-propionate. B The same microscopic field as A, but recorded for fluorescence after hybridization with a probe specific for Meganema perioderoedes (Nielsen & Nielsen, 2005).

Autoradiography In The Clinical Context

Positron-emission tomography (PET) – Diagnostic imaging method used to observe biological processes in the body. In a PET scan, a radioisotope is coupled to a radioactive tracer and then introduced into the body. The radioactive decay from the radiotracer produces positrons: particles with the same mass as electrons, but with opposite charges (i.e., +1). When a positron and an electron collide, they annihilate each other, and two gamma rays are produced, which are detected by a gamma camera. Common radionuclides used in PET scans are listed in Table 1. Gamma cameras record several 2D images that correspond to the radioactivity in the capillary vessels near the target organ or in the whole body. Using multiple projections of the acquired images, a computed tomogram, i.e, a 3D reconstruction, is generated. The 3D tomogram can then be digitally manipulated to analyze the radioactivity distribution in the sample (Figure 6).

Proteins, lipids, sugars, and even patient cells can be used as radioactive tracers. For example, to determine the source of internal bleeding in a patient, it is possible to radiolabel the patient’s red blood cells, inject them back into the body and then follow the accumulation of radioactivity in a specific part of the body using a PET scan (NIH, 2016).

Single-photon emission computerized tomography (SPECT) – Similar to PET scan but uses different radiotracers. While in PET scans image comes from the production of positrons, in SPECT imaging, the radioactive tracers emit gamma rays. A list of the most common SPECT radioisotopes is shown in Table 2.

In the clinical setting, the controlled used of autoradiography by humans allowed for astonishing advances in human health. However, it should not be overlooked the fact that all the autoradiography methods detailed above make use of ionizing radiation to produce the final images – autoradiographs. In PET and SPECT scans, the radiation to which patients are exposed is higher than in routine chest X-rays exams, due to the internal exposure to the radioactive source. As such, the prescription of PET and SPECT scans must consider health consequences, like increased cancer and neurodegenerative disease risks.