In 1887, Sir Victor Horsley, while studying the connections of the cerebellum, realized that a specific method to allow precise lesioning of the cerebral nuclei is essential. This realization led to the introduction of stereotaxy in neuroscience research. Stereotactic neurosurgery has enabled the localization of targets of interest with a multifaceted set of techniques that can assess anatomic, metabolic, and functional aspects and allow precise interventions on the brain or spinal cord regions (Barbara, Damien, & Catherine, 2014).

In 1887, Sir Victor Horsley, while studying the connections of the cerebellum, realized that a specific method to allow precise lesioning of the cerebral nuclei is essential. This realization led to the introduction of stereotaxy in neuroscience research. Stereotactic neurosurgery has enabled the localization of targets of interest with a multifaceted set of techniques that can assess anatomic, metabolic, and functional aspects and allow precise interventions on the brain or spinal cord regions (Barbara, Damien, & Catherine, 2014).

Before beginning with the surgical procedure, it is essential to check that the animals are in good health by analyzing their appearance and general behavior. The subjects can be examined clinically to detect certain anomalies. If any abnormality is found, it is necessary to not use that animal as a subject in a neurosurgical procedure because the abnormality may cause anatomical or behavioral alterations and could interfere with the experimental results. The investigator should not use the animal if it shows reduced appetite, weight loss, abnormal exploratory behavior, bite marks, scratches, self-mutilation, prostration, hyper-responsiveness, patchy, dull, and/or ruffled fur, and abnormal posture or facial expression. Assess the animal for its health and activeness.

Before beginning the surgical procedure, give the animal a dose of an analgesic such as carprofen. After 15 minutes of the analgesia induction, induce the anesthesia with an intraperitoneal injection of xylazine and ketamine. Induce the local anesthesia with a subcutaneous injection of lidocaine or bupivacaine at the sites of the incision and the pressure points of the stereotaxic apparatus. It is recommended to use a solution of 2 % adrenaline (epinephrine: 5 mg/ml) and dilute it to ¼ in sterile water.

Shearing is performed to eliminate hair and facilitate the disinfection of the skin. Do not injure the skin while shearing, since any inflammation can potentiate local superinfection and weaken the tissues of interest. Shearing should be performed in the preparation zone after the animal is sedated or anesthetized.

Setting Up the Animal in the Stereotaxic Instrument

After achieving the adequate anesthesia place the animal in the stereotaxic apparatus. Make sure that all the surgical instruments are ready and available nearby the surgical area.

Fix the bars in the instrument carefully. Gently grasp the head of the animal by the sides of the instrument to direct the ear canal towards the fixed bar. Carefully maneuver the head horizontally onto the bar and position the tip of the bar behind the aural bone spur. A soft characteristic click will confirm the accurate placement, do not confuse it with a louder snap that indicates the eardrum rupture if the bar is inserted deeply.

Note: Do not place the finger around the neck to hold the head of the animal, since it could block the trachea. Make sure that the animal is adequately anesthetized and appropriately positioned as poorly maintained head position can cause asphyxiation.

To lock the snout in position, lower the nose bar. Firmly fix the nose bar with the setscrew, but do not apply excessive pressure to ensure that the head is immobilized without injuring the animal. The head cannot move after the incisor bar and nose bar are appropriately placed.

Before disinfecting the surgical site, put a rectal temperature probe in place. To minimize trauma and discomfort apply Vaseline. After the ear bars placement under sterile conditions, disinfect the skin where the incision will be made by washing with a sterile gauze (soaked with alcohol, antiseptic soap, and solution). Discard the gauze pad if it touches the edge of the shaved zone. Antiseptics are used to disinfect the skin and kill the local flora. The antiseptic spectrum varies depending on the product and the quality of its application.

Cover the entire animal with the drape to prevent any contamination. Make sure that the overall procedure of draping remains coherent.

To incise the scalp, use a scalpel with a new blade. Make the incision confidently and precisely to avoid damaging the edges which can affect healing. The linear incision should begin rostrally, in front of eye level, and run caudally 0.5 cm behind the ear bar alignment line and includes all the layers of the skin.

Identify the stereotaxic landmarks: bregma and lambda by visualizing the different suture lines of the bone plates on the skull surface. The accurate and precise determination of the two reference points will determine the quality of approaching the target structure. Bregma is the intersection point of the sagittal and frontal plate sutures at the rostral level of the animal’s skull. Lambda is the point on the midline and at the base of the triangle formed by the intersection of lambdoid sutures and the sagittal suture. Lambda is parallel with the virtual interaural line shown at the axis of the ear bars. Sometimes lambda is situated just anterior to the interaural line, but it could never be posterior to this line.

Make sure that the distance between the bregma and lambda is about 8.7 ±0.3 mm to ensure the accuracy of the lambda coordinates. The determination of coordinates is incorrect if the distance is greater than 9 mm or less than 8.4 mm.

Use a sterile needle for suturing. Suturing is done to bring together and maintain the edges of the wound for rapid healing and recovery. Sutures minimize inflammation, infections, and accidental or spontaneous wound opening. Following is the procedure for suturing;

Place the animal on absorbent paper in a cage to prevent dust or litter from contacting the suture. Treat hypothermia until the anesthesia lasts. Maintain an appropriate temperature in the recovery room either by using an incubator, lamp, or a heating pad. Place some moistened food pellets in the cage to encourage feeding. Return the animals to the husbandry after complete awakening. Animals should be closely monitored postoperatively. Observe the animals for any discomfort or pain and treat the symptoms as needed. Change the cage bedding frequently to avoid contamination. If needed, clean the sutures with the help of a sterile cotton swab soaked with disinfectant. If the wound bleeds, apply direct pressure for a few minutes. If bleeding persists, re-anesthetize the animal to manage hemostasis. Suture opening can contaminate the wound so must be treated as a traumatic lesion. Antibiotics can be applied to foster healing. Treat the pain by injecting analgesics.

The stereotaxic neurosurgery was used to assess the efficacy of poly (lactic acid-co-glycolic acid) (PLAGA) microspheres for interstitial chemotherapy of brain tumors. In the study, two types of 5-Fluorouracil-loaded microspheres were stereotactically implanted in female Wistar and Sprague-Dawley rats. One type of 5-FU presented a fast release profile (FR), and the other exhibited a slow release pattern (SR). It was observed that the implantation of 5-FU-loaded PLAGA microspheres in the rat brain does not present any evident toxicity. The results suggested that the microspheres possess a longer sustained delivery period in vivo as compared to in vitro. It was concluded that intra-tumoral implantation of SR-type 5-FU-loaded microspheres significantly reduced the mortality of C6 tumor-bearing rats. The neurotoxic surgery has enabled the researchers to evaluate the in vitro efficacy of chemotherapeutic loaded microsphere in the rat brain.

Stereotaxy is also used for sampling of neurotransmitters such as microdialysis in rodents. Microdialysis enables the researchers to directly measure the unbound tissue concentrations and monitor the physiological and biochemical effects of drugs in vivo. The technique allows the sampling and quantification of substances in blood and tissue, including neuropeptides, neurotransmitters, enzyme concentration and activity, electrolytes, hormones, and pharmaceutical agents. The method also provides with an in-depth observation of pharmaceutical effects of various drug candidates on extracellular levels of endogenous substances.

In the study, neuronal stem cells were transplanted using the stereotaxic neurosurgery in the mice infected with the neurotropic JHM strain of mouse hepatitis virus (MHV). The MHV results in a pathological condition similar to the demyelinating disease Multiple Sclerosis (MS). The results suggested that the stereotaxic transplantation of neuronal stem cells into the spinal cords of mice, affected by MHV, improved the re-myelination and clinical outcome. The study validated that the cell replacement therapies are vital to the treatment of chronic neurologic diseases and the in vivo models are essential in understanding the complex interactions between the transplanted cells and the host tissue microenvironment. 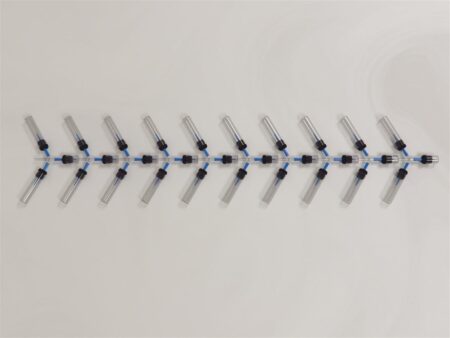